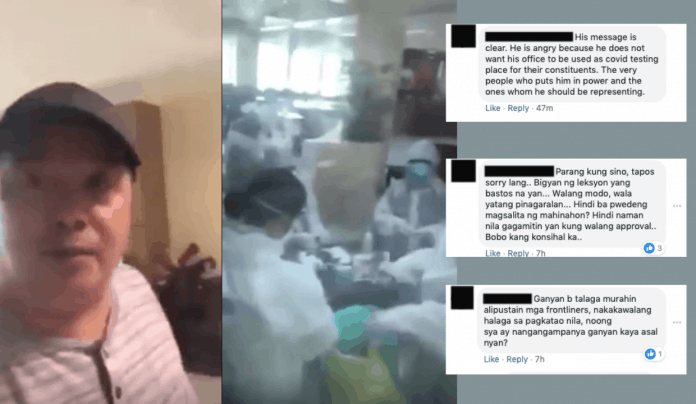 In a video he shot himself, Pasay City councilor Moti Arceo went viral after he berated and cursed at several health workers who were testing city hall employees for the coronavirus disease (COVID-19).

Arceo was enraged after finding out that the health workers were doing rapid tests in their session hall.

Aside from the video, attached in the viral post is a memorandum from the City of Pasay’s human resources department, indicating that testing will be done in their Sangguniang Panlungsod Session Hall.

The uploader of the viral post, Alexia Guevara, said it is upsetting that politicians like Arceo manage to get away with this kind of behavior while the country struggles with the pandemic.

“Nakakagalit lang na habang ang buong bansa nagsa-struggle pa sa public health at econ effects ng COVID-19, yung mga politician and people in position like Moti Arceo manage to get away with things like this. Yung #1 frontliners–healthworkers–ang minumura-mura niya when in fact, service yung ginagawa nila. Something that will benefit everyone,” she wrote on her post.

In the video, he constantly asked the frontliners if they were thinking and if it was not dangerous to do the testing in their session hall, why are they using their personal protective equipment (PPEs).

At one point in the video, the councilor noticed a health worker taking a video of him.

As of writing, the viral post uploaded on May 23 has already collected 1.3M views, 26k reactions and 7k comments.

Netizens were clearly appalled at the fuming public servant’s words and actions.

“His message is clear. He is angry because he does not want his office to be used as covid testing place for their constituents. The very people who puts him in power and the ones whom he should be representing,” a netizen said.

In a report by the STAR, the Department of the Interior and Local Government (DILG) said they want sanctions imposed on Arceo.

DILG spokesman and Undersecretary Jonathan Malaya said they will not tolerate harassment against health workers.

“The DILG will not tolerate  any form of harassment against health workers,” he said.

Arce, on the other hand, said that he did not harass the health workers, further claiming he only told them not to use the venue for COVID-19 testing.

Under the directive of the DILG, the governments of Quezon City, Manila, Muntinlupa and Pasig have already passed ordinances prohibiting discrimination against frontliners and other healthcare workers.

Hospital CEO in Iceland thanks Pinoy frontliners for their service...

WATCH: UST Singers alumni from all over the world dedicate...

Brazil’s Christ The Redeemer lights up for Pinoy frontliners

After donating tents to hospitals, Angel Locsin donates blood to...