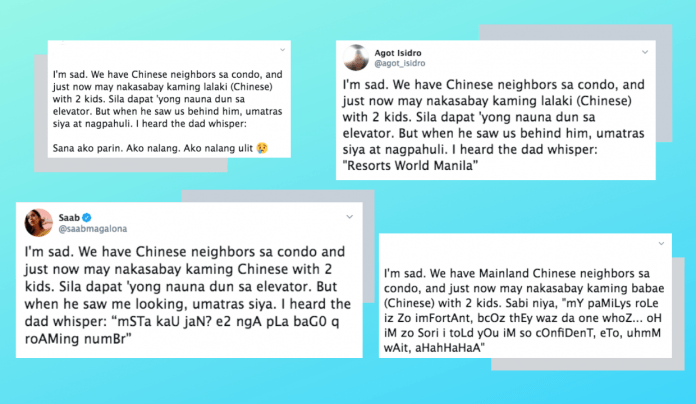 How many times have you seen this story in your timeline?

In a report from Philstar.com, known Duterte administration critic Jover Laurio of Pinoy Ako Blog claimed that the public was fooled by “copy paste troll farms” with a viral sympathetic story about a Chinese man and his kids in the Philippines.

Attached in her post are screenshots of what seemed to be the same story but from different Facebook accounts.

Facebook user Cla Risse, the author of the viral post, fought off the claims of her being a troll.  “To those who copied and shared a screencap of my post: You should’ve asked my permission,” she said.

Part of a new post defending her viral story read: “I posted my realization from MY OWN EXPERIENCE. I didn’t mean to make it a venue for discussion and quarrel among my unexpected fans and bashers. You are welcome to read and reflect, but please have the decency to shut up if you don’t have anything good to say.

“I’m sad. We have Chinese neighbors sa condo, and just now may nakasabay kaming lalaki (Chinese) with 2 kids. Sila dapat ‘yong nauna dun sa elevator. But when he saw us (Filipinos) behind him, umatras siya with his kids at nagpahuli. Hindi sila sumabay. I heard the kids asked their dad why, but he just shushed them. Kasakit man sa heart. ?

“Let’s pray for each other’s good health, regardless of race. This is not a time to blame and discriminate.

“P.S. Nobody knows the feels more than those who saw the sadness in the man’s eyes. Yes, don’t forget PRECAUTIONS. But don’t be so overwhelmed by that and set aside COMPASSION. HUMANITY, as you say.”

Netizens were quick to react to the news and made their own versions of the story.

Actress Agot Isidro hopped on the trend as well.

Remember Bb. Pilipinas World 2008 Janina San Miguel’s viral answer from the pageant’s Q&A? Well, it made its way to this meme.

This one got a little real.

“Blackpink in your area!”

The 2019 novel coronavirus originated in Wuhan, China. As of writing, there are two confirmed cases of nCoV in the Philippines, a couple from Wuhan.

The World Health Organization has advised the public to observe safety precautions to reduce transmission of the virus.