Maine Mendoza is 2019’s most tweeted about Pinoy celebrity, plus other year-end Twitter lists 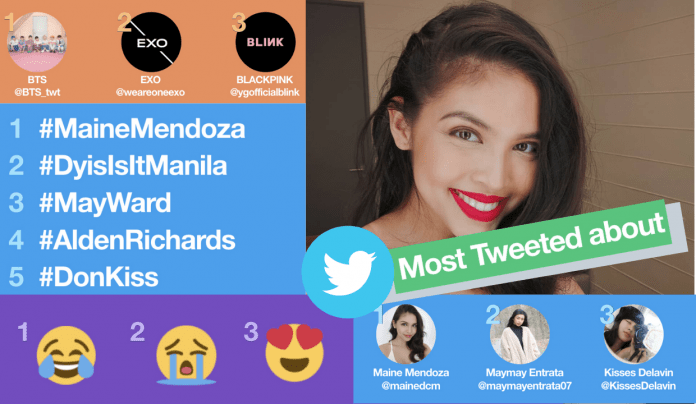 2019 is about to close and as part of its year-end tradition, Twitter released lists on the most talked about celebrities, moments and trends this year.

Check out who and what were the most tweeted of them all on the social media platform in 2019.

Most tweeted accounts and hashtags

Kapuso mainstay Maine Mendoza dominated Twitter in 2019 for being the most tweeted account and the most tweeted about hashtag. This year, she got paired for the first time with Kapamilya actor Carlo Aquino for the Black Sheep film Isa Pa With Feelings.

Love teams almost filled up the list of the most tweeted about hashtags in the Philippines with the consistent #MayWard, the pair-up of #Maymay Entrata and #Edward Barber.

Despite the onscreen breakup of #DonKiss (Kisses Delavin and Donny Pangilinan’s loveteam) in June 2019, the now defunct partnership still secured a spot in the list, with the continued support of hopeful fans.

The #HelloLoveGoodbye movie topbilled by Kathryn Bernardo and Alden Richards completed the Top 10. It made history after becoming the highest-grossing film in the country with over P800 million box-office earnings.

Most tweeted Kpop groups and hashtags

And because “Filipino fans are avid spazzers of Kpop idols”, Twitter also created a list for this specific music genre.

BTS, EXO, Blackpink, Seventeen, and TXT emerged as the top five most tweeted about Kpop groups in the Philippine in 2019.

Are you one of those who made Twitter a go-to place when you want to stan your favorite oppa?

Can we all agree that this is somewhat a relatable list? *Insert face with tears of joy emoji*