‘Reflection’: The story behind Catriona Gray’s gown for final walk as Miss Universe 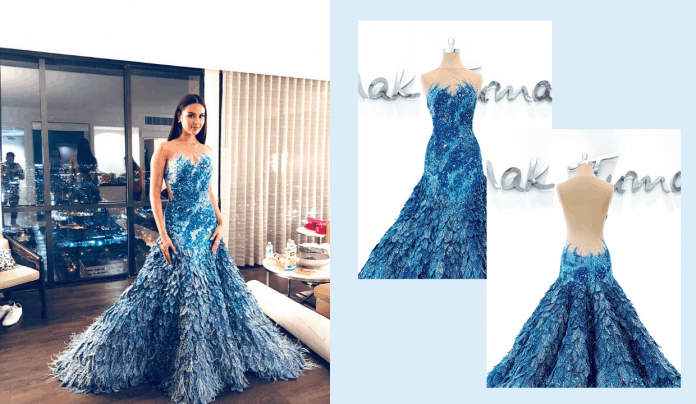 Her beautiful turquoise gown was made by designer Mak Tumang, the creator of Catriona’s iconic Ibong Adarna-inspired and Mayon Volcano-inspired gowns.

The Ibong Adarna-inspired gown she wore at the preliminary competition of last year’s Miss Universe was made of layers of embroidered gold feather patterns coated with Swarovski crystals and other jewels.

Mak’s lava-like masterpiece which was inspired by Mayon Volcano was Catriona’s gown when she won the international pageant in December 2018. It was iconic for complementing her renowned “lava walk.”

This year, for the Albay beauty’s final walk, the Kapampangan designer dubbed his most recent masterpiece as “Reflection”. It was said to be inspired by how the Philippine eagle mirrors itself when soaring over the sea.

“The creation’s inspiration stems from the vision of the Philippine Eagle flying over the flawless turquoise seas embracing our archipelago,” he said in a Facebook post early today.

He explained the eagle’s ability to look down at its reflection in the water, despite its capability to soar far beyond the clouds.

“This display of both might and humility is the call each of us heed,” he said.

“As a nation, we are to have a steadfast spirit yet we also take a moment to journey within ourselves. By doing so, we could be able to mirror the beauty that is within us, to mirror what is true and just and to mirror the light which illuminates our path. Silay; to mirror, Pagbubulay; to introspect – the Filipino nation’s moment of reflection,” he explained further.