‘I try my best to do my part’: Angel Locsin on being included in Forbes Asia’s Heroes List 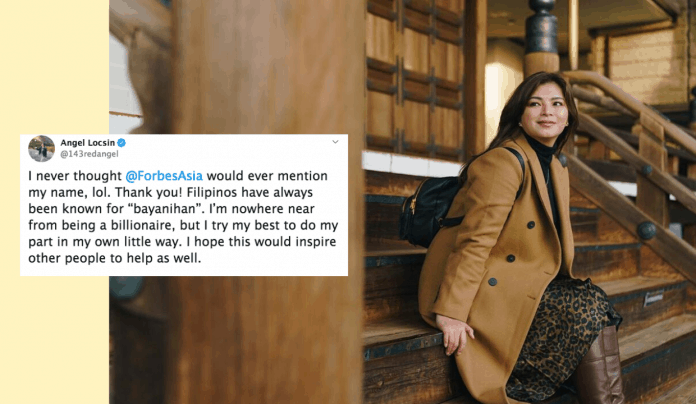 Forbes Asia released a list of “Heroes of Philanthropy” yesterday, December 3. The list highlights outstanding altruists who are committed to solving some of the pressing issues in the Asia-Pacific region.

Among billionaires, entrepreneurs, and celebrities on the list, our very own Angel Locsin was honored for her philanthropic efforts. (READ: Angel Locsin visits more quake-hit areas as victims beg for help.)

A day after the list was released, the actress thanked Forbes Asia for including her in the list. She admitted she has “never thought” her she would be mentioned.

“I never thought @ForbesAsia would ever mention my name, lol. Thank you! Filipinos have always been known for “bayanihan”. I’m nowhere near from being a billionaire, but I try my best to do my part in my own little way. I hope this would inspire other people to help as well,” she said in a tweet.