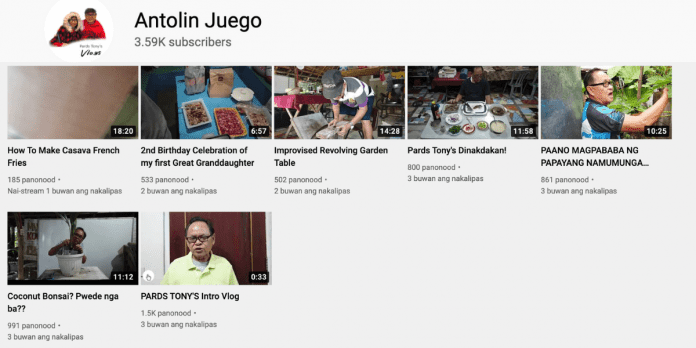 For this 75-year-old man from Pampanga, age will never be a hindrance to finding a new hobby.

Antolin Huerto Juego, a retired agricultural engineer, said that it took him months to mourn the death of his wife, Teodora, who passed away a day before their 48th wedding anniversary in 2021 due to complications from her diabetes.

According to their granddaughter, Thea Anne Juego, Lolo Antolin mourned the passing of his wife for a long time.

Months later, after watching several YouTube videos, he decided that it’s finally time to learn how to cope with the pain, prompting him to try something new — vlogging.

With the help of his grandchildren, they set up a YouTube channel for Lolo Antolin.

Thea admitted that her family initially hesitated to put up the channel, but later supported Lolo Antolin after seeing positive effects.

Antolin said that he really enjoys sharing his knowledge on the platform.

In November, Antolin launched his YouTube channel. He uses the platform to share his knowledge in agriculture as well as their family recipes, and his quick travel getaways.

Thea and her brother worked hand in hand to help Lolo Antolin on his YouTube channel.

In fact, Thea played a vital role in growing the audience of Lolo Antolin after she gave him a shoutout on her personal TikTok account.

“My cousin told me na, “What if you made a video about daddy?” And I was hesitant at first because I’m not that good in editing or I don’t know how to pitch the video. So ayun, triny ko lang naman. Masaya naman kasi talagang ‘yung mga tao naa-appreciate nila ‘yung ano, ‘yung video for dad,” Thea recalled.

The post surprisingly went viral, with netizens expressing their support to her lolo. From 127 subscribers, it grew to 1,890 overnight after she posted on TikTok.