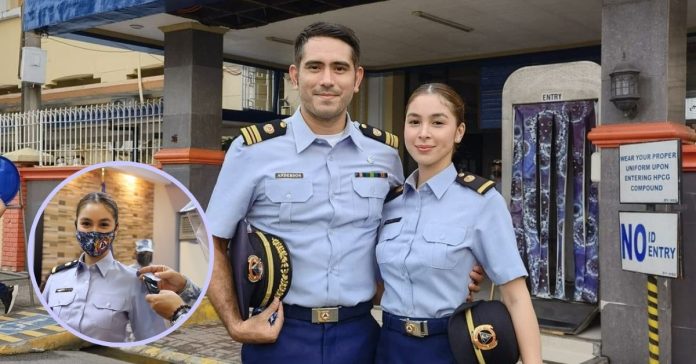 On Wednesday, the Philippine Coast Guard (PCG) announced that they are welcoming Julia Barretto in the PCG Auxiliary K9 Squadron.

In the official Facebook page of the PCG, they shared that today’s oath-taking was led by PCG Commandant and CG Admiral George V. Ursabia at their national headquarters in Port Area, Manila.

The actress’ boyfriend, actor and Auxiliary Lieutenant Commander Gerald Anderson of the K9 Squadron, was present.

“During the event, the Coast Guard Commandant highlighted the increasing need for K9 units in the country for the promotion of national security,” they wrote.

They added that as the most senior appointee, “Auxiliary Ensign Barretto” spoke in behalf of the PCGA members.

“She thanked the PCG, especially the PCGA K9 Squadron, for welcoming her into the field of public service.

“In return, she pledged to actively support the initiatives of the unit towards the delivery of humble and compassionate service to the Filipino people.”

Gerald is definitely a proud boyfriend as he took to Instagram to welcome Julia to the PCGA K9 Special Support Squadron.

Prior to her being an official member, Julia was already spotted in several PCG activities attended by Gerald as supportive girlfriend.