Filipino artwork featured on this pair of classic slip-ons 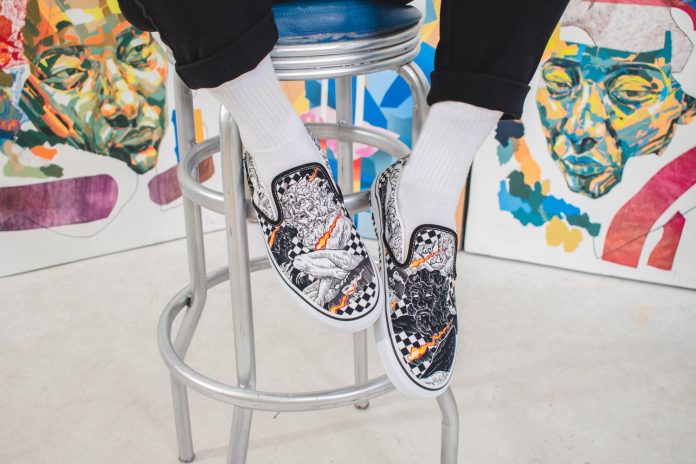 Save the date… or should we say, start saving your allowance! The first-ever Filipino designed Vans is coming this Friday!

For the first time, an artwork of a Filipino artist will be featured on a pair of Vans classic slip-ons after the design won in the 2018 Vans Asia Custom Culture Competition.

Fascinating trivia: The artist behind the winning design is only 23 years old!

University of the East College of Fine Arts grad Nikko Pelaez bested over 10,000 submissions across Asia and took home US$2,000 (around P100,000) for his winning design called “Along With The Gods,” which took inspiration from the Greek mythology.

According to Pelaez, the thought-provoking artwork, which depicts Greek gods casting fires and brimstones, is a representation of self-empowerment.

The design was mass-produced by Vans Philippines as part of the competition’s prize and will be sold for P4,298 at selected Vans concept stores in the Philippines starting November 15, 2019.

He was also the artist behind the viral “Batang Maynila” shoe series that featured four different pairs of Vans slip-ons customized with Manila Mayor Isko Moreno’s face and his famous street slang “Yorme.”

Vans Philippines commissioned Pelaez to customize the shoes, which were given to Moreno as a birthday gift last October 25.

But prior to his recent feat, Pelaez’s artworks have also been featured in several exhibits and galleries such as ManilART 2019, Nova Gallery, Secret Fresh and Galerie Artes, among others.

Now a full-time painter, Pelaez wishes to become an inspiration among the youth.