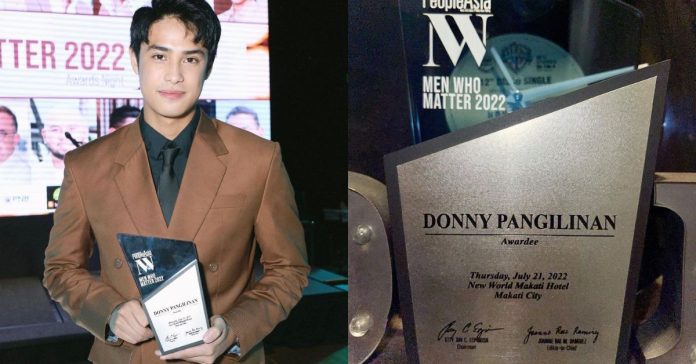 Kapamilya actor Donny Pangilinan was recognized as one of People Asia’s Men Who Matter 2022 at the New World Makati Hotel on Thursday night.

On July 22, the 24-year-old took to social media to express his gratitude to be awarded alongside notable personalities from various industries.

“Truly an honor to be part of @PeopleAsia’s Men Who Matter 2022 last night. It has been a crazy journey so far, but this is definitely one for the books. Glory is all His 🙏🏼,” the actor wrote in the caption of his Instagram post.

Atty. Chel even shared on social media his encounter with the young actor during the awards night, saying that he was “napakabait at napakahusay na bata”.

“Nice to see you  @donnypangilinan at the People Asia Men Who Matter Awards! Napakabait at napakahusay na bata! It truly runs in the family!” the human rights lawyer wrote in his Twitter post on July 21.

In 2021, Donny starred in the hit ABS-CBN series He’s Into Her, followed by a film with onscreen partner Belle Mariano titled Love Is Color Blind.