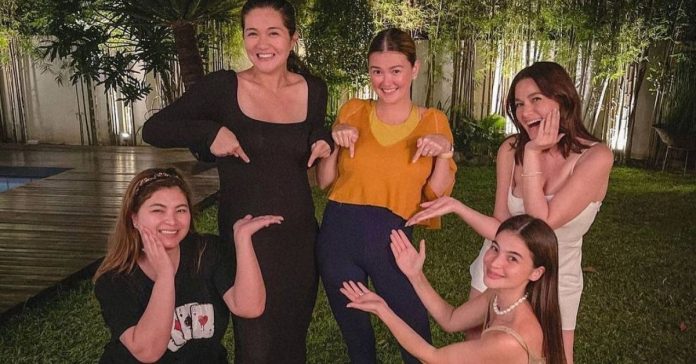 Stars aligned for good friends Dimples Romana and Angelica Panganiban as they started their pregnancy journey together.

Dimples took to social media to celebrate her good friend Angelica and her first pregnancy.

“When WOMEN celebrate each other’s JOY! WOMEN supporting WOMEN. Ganun dapat diba. Belly BUMP to another gorgeous friend momma of ours @iamangelicap,” she wrote in the caption.

The actress then congratulated Angelica and her boyfriend Gregg Homan for the big news they broke on Sunday.

“Nakakahappy ang Belly Reveal ninyo! SO MUCH LOVE for these ladies!!! A very HAPPY and BLESSED Sunday indeed,” she added.

Dimples’ snaps were from the catch-up dinner which Angel Locsin hosted back in late February. Anne Curtis, Bea Locsin and Dominic Roque were also there for their reunion.

Soon-to-be mom Angelica announced her big news with a photo of her first child’s ultrasound.

Meanwhile, Dimples announced that her family of four will have an additional fifth member in black-and-white photos taken by Shaira Luna.