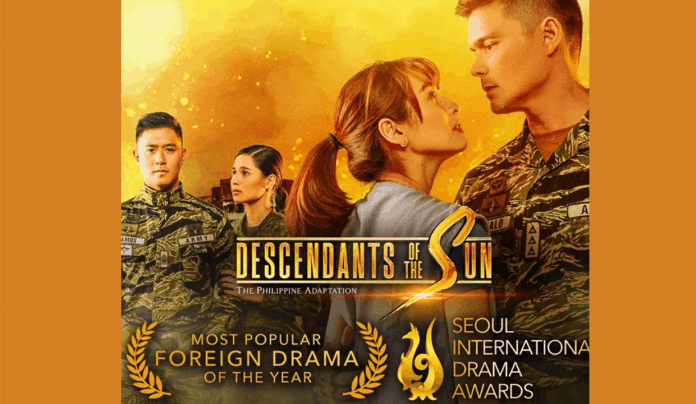 The Philippine adaptation of the South Korean drama series Descendants of the Sun (DOTS) was awarded the Most Popular Foreign Drama of the Year in the 15th Seoul International Drama Awards (SIDA).

The Kapuso series won the award alongside two other foreign TV dramas Snowpiercer produced by US broadcaster TNT and The New Pope produced by Sky Atlantic and HBO. This is the first time a Philippine program has received recognition from the award-giving body.

In a report by GMA News, the drama top-billed by Kapuso actors Dingdong Dantes and Jennylyn highlighted the “influence of K-drama not only in Asia but also around the world”.

In an update on its Facebook page, the DOTS Ph took pride in the global recognition and thanked its supporters.

The DOTS local version that premiered in February, however, has yet to make its TV comeback after it temporarily stopped airing due to the COVID-19 pandemic.

The SIDA awarding ceremony will be held via live streaming on September 15.

Kapuso stars Alden Richards and Gabby Concepcion both previously received the Asian Star Prize award from the award-giving body in 2019 and 2017, respectively.