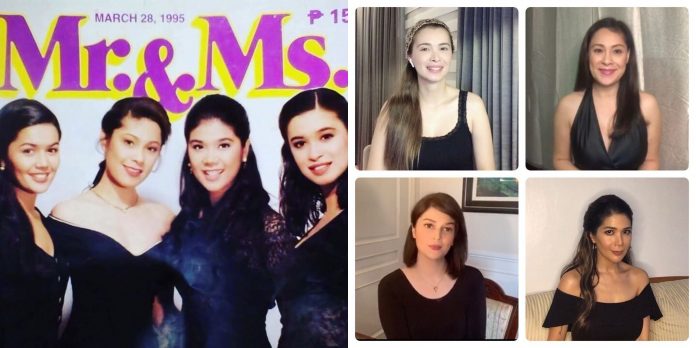 After they last worked together in 1995, cousins Sheryl, Sunshine, Geneva and Donna Cruz have reunited virtually to perform a cover of the ’90s hit Breathless.

All of them shared the The Corrs song collab on their respective social media accounts on Sunday.

“Enjoy this collaboration of ours! A blessed Sunday to all. ?❤️??,” Sunshine wrote.

Sheryl said that they hope to “bring inspiration to all” amid the pandemic.

According to Geneva, the last and only time they worked together was in 1995, for a Mr. & Mrs. magazine cover.

In a separate post, Donna reflected on how they have influenced each other, including in their foray into showbiz when they were very young, and have remained close through the years, now that they have families of their own.

Sheryl and Sunshine are still very much active in showbiz — the former a Kapuso, while the latter a Kapamilya star.

Geneva just returned to the Philippines after living for several years. The former Smokey Mountain singer has plans to resume her acting career, according to a STAR interview.

Donna, however, has chosen to live away from the spotlight after getting married to Cebu Doctors’ Group of Hospitals owner Dr. Yong Larrazabal III.