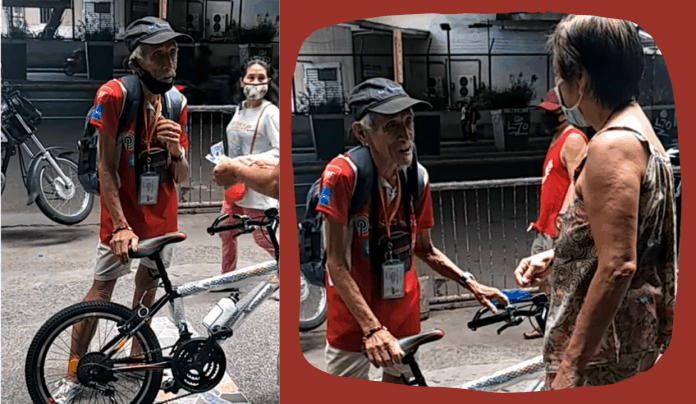 Many netizens were touched by the heartwarming gesture of a bicycle shop owner who gifted an elderly street vendor a new bicycle.

The Facebook page narrated that Tatay Carlos, 87, has been dropping by the shop daily for more than two weeks already to ask if they have an available bike for sale.

Last week, a mountain bike priced at P4,500 became available in the shop which Tatay Carlos asked if he could purchase for P2,000.

According to Fe Carandang, owner of the bike shop, she initially refused Tatay Carlos’ request, but was moved when she heard of the old man’s story.

Tatay Carlos came back back the other day to ask the same question and buy the bike with the same amount.

When Tatay handed his payment, the owner gave it back to him and said, “Kunin mo na ‘yan, regalo namin sa iyo.”

In disbelief, an emotional Tatay Carlos took off his face mask to thank the owner for giving him the bike he wanted for free.

In another Facebook post on Thursday, CARBS shared that they have been receiving a lot of messages wanting to extend their help to Tatay Carlos. They also left a nice little reminder to always be on the lookout for people in need of help.

In a STAR update on Thursday, the owner met with Tatay Carlos to hand over to him the safety gear that was donated by a netizen.

Netizens said that they can’t help but get teary-eyed over the story, expressing their admiration for the bike owner’s generosity and Tatay Carlos’ determination.