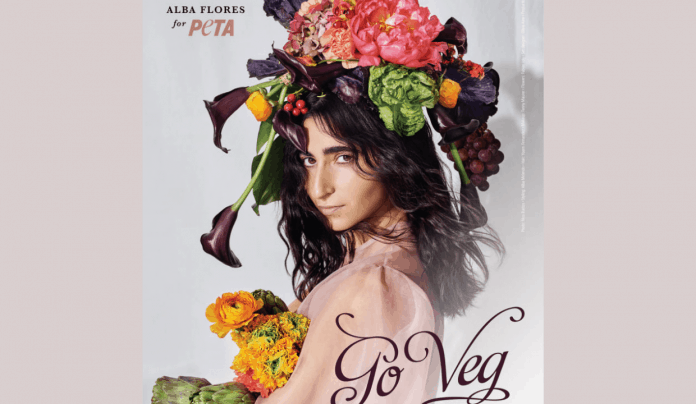 Wearing a stunning headdress made of fresh fruits, veggies and flowers, Spanish actress Alba Flores stars in the new ad campaign for PETA that aims to encourage people to go vegan — a “lifestyle change” seen to help prevent the spread of deadly animal-borne diseases.

The Money Heist star decided to go vegetarian and stop eating meat after seeing how much food was wasted after her family’s Noche Buena celebration. “I started to think about where that food came from and how much food will be thrown away … and (wondered) how necessary the deaths of those animals really were,” she explained in a video for PETA Latino.

“I started to look into it, and I realized that this wasn’t the only big problem. The entire animal agriculture industry poses a very serious problem for the planet.”

According to PETA, the reasons to go vegan have never been more pressing in the wake of COVID-19 as coronavirus is believed to have originated in a wet market where live and dead animals are sold for human consumption. The organization said that meat markets, factory farms and slaughterhouses are “crammed full of sick and stressed animals,” making them “breeding grounds for zoonotic diseases.”

“Previous influenza viruses such as avian flu and swine flu originated in chickens and pigs. Every person who goes vegan reduces their carbon footprint, as the meat industry is a leading producer of the greenhouse gases that contribute to climate change; spares nearly 200 animals a year daily suffering and a terrifying death; and reduces their own risk of developing heart disease, diabetes, and cancer,” PETA said.

For Flores, who is best known among international audiences as Nairobi in the hit Netflix series, she now feels so much better adopting a diet of vegetables, legumes and grains. “I think that your food doesn’t have to be the cause of suffering and exploitation of animals.”

Flores joins the roster of celebrities such as Hollywood stars Joaquin Phoenix and Natalie Portman as well as Pinoy actor Rafael Rosell who have worked with PETA to promote healthy, humane meat-free meals.

Lovi Poe gets sweet message from boyfriend with the help...