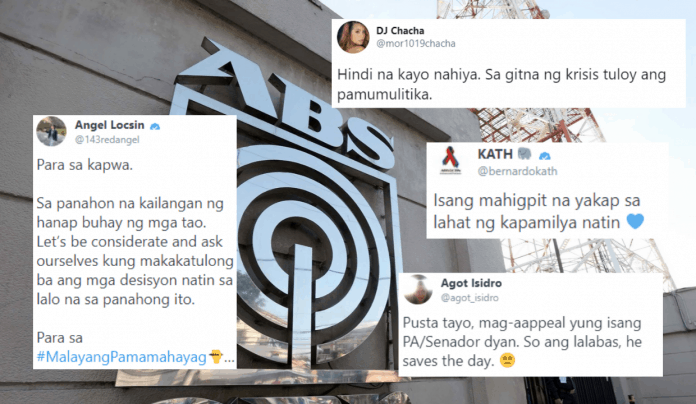 Kapamilya stars posted online their thoughts about the National Telecommunications Commission (NTC)’s cease and desist order against ABS-CBN on Tuesday after the media giant’s legislative franchise expired on May 4.

“NTC directed ABS-CBN to stop operating in various television and radio broadcasting stations nationwide, ‘absent a valid congressional franchise which lapsed on May 4, 2020’,” NTC said in a statement.

“Upon the expiration of RA 7966, ABS-CBN no longer has a valid and subsisting congressional franchise as required by Act No. 3846,” the statement added.

ABS-CBN was given 10 days to “respond as to why the frequencies assigned to it should not be recalled.”

Solicitor General Jose Calida on Sunday warned NTC commissioners that they could face graft charges should they issue ABS-CBN provisional authority to operate after its franchise would expire on Monday.

Malacañang, on the other hand, has left ABS-CBN’s fate to NTC, the sole agency tasked to regulate and supervise radio and television broadcast stations.

“The decision lies on the commission and the President cannot preempt the NTC when it comes to this issue. We will let the NTC decide,” said presidential spokesman Harry Roque.

Meanwhile, supporters of the Kapamilya network rallied behind the media giant with trending keywords among Twitter’s trending topics such as #NoToABSCBNShutdown, #DefendPressFreedom, and IStandWithABS-CBN.

Meanwhile, here’s how Kapamilya celebs and personalities reacted to the issue: