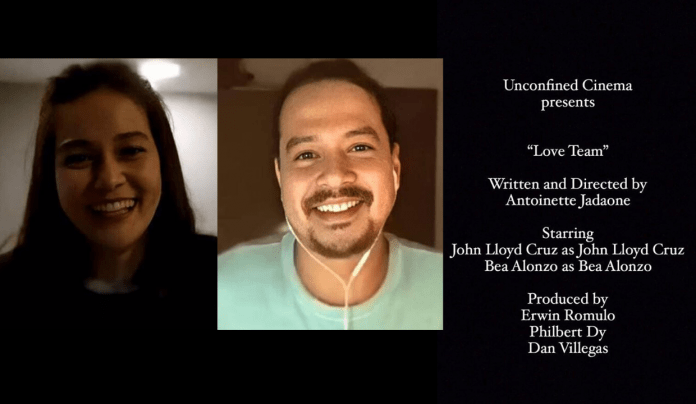 John Lloyd Cruz has confirmed that his kilig online exchanges with Bea Alonzo were a scripted performance of “Love Team,” a love story designed to be told in one of the most-used platforms in this time of quarantine.

Over the past two weeks, the former love team partners have driven their fans wild, but at the same time, left them guessing with interactions on Instagram that have blurred the lines between reel and real.

On Wednesday, the actor who is on leave from showbiz took to Instagram to reveal that “Love Team” was written and directed by Tonette Jadaone, and produced by Dan Villegas, Philbert Dy and Erwin Romulo.

He also announced that it was a project that explores uncharted territory that is Unconfined Cinema.

“The Unconfined Cinema was founded on the idea of exploring what else cinema could be, freeing our stories to be told outside of the traditional spaces and conceptual boundaries set by the last century of the medium. In this unprecedented time of quarantine, in a time when movie production is impossible, we found it especially pressing to find ways to tell our stories,” John Lloyd wrote.

The story was a nod to the esteemed place the genre holds in Philippine cinema but the story-telling takes an unconventional route by using a platform people have been turning to during the COVID-19 lockdown.

“Love Team is a love story — whether romantic or in its other forms — told entirely within Instagram. It is a story of our times. Love stories have always had their place in Filipino cinema, and we wanted to bring the feelings that those movies inspire to a platform that has become more relevant and utilised in this time of quarantine — social media, specifically Instagram. The use of social media creates all sorts of new possibilities for storytelling,” he said.

According to the actor, the story was adapted from and had evolved into real-life events, while “integrating our genuine sentiments over the state that we’re in.”

“This is a platform where we all share little bits of ourselves. Through our images, this curated list of memories, we reveal what it is we want the rest of the world to see. Using the various features of Instagram, we attempted to tell a story of two people reconnecting in a trying time; separated by distance, but united in their memories,” John Lloyd said.

And if the dialogues did seem true to life, aided in part by the two’s still sizzling onscreen chemistry, John Lloyd said it was intentional as they had earlier indicated in Instagram posts before starting the project. (READ: John Lloyd Cruz, Bea Alonzo tease virtual reunion.)

“We are in a culture where the usually distinct line between reality and make-believe blur. We started this story by stating that ‘any resemblance to persons, living or dead, is intentional.’ And that remains true. It was the only way this was possible,” he said.

The actor encouraged other members of the film community to tap and take advantage of whatever platform is available so they can still tell their stories at this time when movie and TV productions have been suspended indefinitely.

“The Unconfined Cinema invites filmmakers and artists to join us in exploring the possibilities of our cinema. Not just on Instagram, but on every stage imaginable,” he ended.