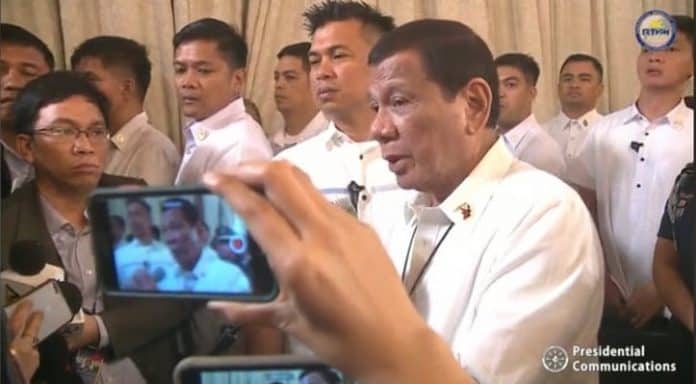 President Duterte said that he accepts the apology of ABS-CBN over the non-airing of his political ads during the national elections in 2016.

Top executives of ABS-CBN earlier said sorry to the president during a Senate committee hearing on the network’s franchise renewal.

“Yes. Ay nandyan yan. I accept the apology. Of course!” he told reporters in an interview aired over the Presidential Communications Facebook page, on the sidelines of NCCA’s Ani ng Dangal event today at the Malacañang Palace.

When asked if he would accept the P2.6M refund offer from ABS-CBN, he said, “Wag na, ibigay nalang nila sa any charitable institution of their choice.”

“I said I leave it to Congress,” the president also responded to the question if he will be supportive of the media giant’s franchise renewal.

President Duterte also said that he will not interfere. “Well, tao lang rin ako. I have kept a healthy distance from… it’s now (being) deliberated in Congress, the Lower House and the Senate, there’s a plan that they would pass a joint resolution or something. But fundamentally, really, ang decision nasa House (of Representatives) ngayon. Not so much of the Senate because the Constitution says all of these things must originate from the Lower House,” he said.

“Forget about all this hullabaloo, ang ano dyan nasa House. The critical move is in the House. And I tell you, I’m not going to interfere. Wala talaga ako… Kung maniwala kayo, OK. Kung hindi… Those who know me, alam nila,” he added.

It was ABS-CBN president and chief executive officer Carlo Katigbak who issued the apology at a Senate committee hearing after Sen. Christopher Go asked for an explanation as to why the network did not air Duterte’s political ads worth P7M. Instead, it ran a “black propaganda” TV commercial financed by then senator Antonio Trillanes IV, a Philippine Star report said.

The controversial commercial, which featured children, was later banned by a Taguig City regional trial court.

“We are sorry if we offended the President (by airing the Trillanes ad). That was not the intention of the network. We felt that we were just abiding by regulations that surround the airing of political ads,” Katigbak said in the Senate hearing chaired by Sen. Grace Poe.