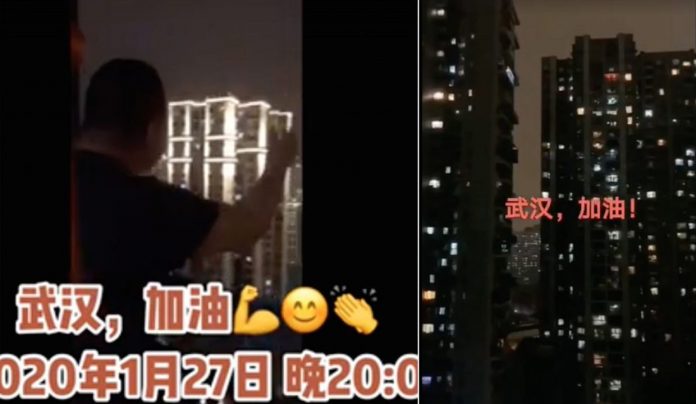 Overseas Filipino workers in Wuhan, China captured on video locals chanting from their room windows “Wuhan jiayou!” on Monday night in an effort to lift each other’s spirits, as the city remains in a lockdown amid the coronavirus crisis.

Jiayou is an often used Chinese phrase that can be roughly translated as “fight” or “keep going”.

Despite being told to stay indoors and avoid social contact, it appears residents of this virus-hit city have found a way to show some “fighting spirit”.

Filipino Chai Roxas, who works as an assistant manager for a trading company in Wuhan, uploaded a video filmed from her location in downtown Wuhan, wherein shouts of “jiayou” could be heard reverberating from residential buildings.

Roxas was “shocked” when she first heard the chanting, which occurred past 8 p.m. on Monday.

She believes it was the locals’ way of encouraging each other to keep going in the face of difficulty. “Ginawa lang nila yun just to be brave, pang-alis na din ng kaba, just to wake people up and and throw away all the negatives vibes.”

She said she couldn’t help but feel moved by what had happened. “Lahat kami ditong mga Pilipino were shouting ‘Jiayou!’ in our house rooms,” she shared.

“(I felt) emotional kasi I’ve been here for six years and this is my second home,” she said. “So touching kasi Wuhan (used to be) very lively.”

Another Filipino in Wuhan named Cheryl Lovi uploaded on social media videos of the chanting taken by her and other friends.

“We were teary-eyed po. It gave us more encouragement,” she said, upon hearing the loud chants which “lasted about 20 seconds”.

According to her, she was somehow expecting it to happen because she received beforehand a WeChat message from a Chinese friend about it.

“We were notified to do this chanting before it happened so we were not surprised,” Lovi said. “Wuhan people are always like that, they always encourage everyone to be one and to help each other.”

She has been working as a teacher in the neighboring city of Zhengzhou since 2007 but it has been a tradition of hers to visit friends and spend the Chinese New Year break in Wuhan. She was still in vacation when the travel ban in and out of Wuhan was declared on January 23 in an attempt to contain the virus.

“You could say that (I’m stuck here). My school said they’ll wait for me,” Lovi said.

She and friends have also set up a YouTube page (Lyra Lovi) to “show what’s happening inside Wuhan” including what were once busiest streets and jampacked stores have become deserted.

“On the first three days of the lockdown, wala talagang tao. But since yesterday (January 27), people were going out to buy some food,” she shared.

She continued, “To be honest, yung iba dito nervous na rin, takot lumabas, umiiyak,” but assured loved ones and fellow Pinoys that they’re being assisted by the local government.

Same for Roxas. When asked about her present situation, she said, “We’re fine here po. We choose to stay at home for our safety.”

Does she want to come home to the Philippines? She said, “I choose to stay here po because my work is here and last night, our boss, she told me don’t go, we need you here.”

She said basic needs like food and masks plus some financial assistance are being provided for by her company. “Wala po kaming pasok since it’s Spring Festival and New Year but we’re still waiting for further notice (as to) when we are going back to work.”

Meanwhile, some OFWs in China expressed disappointment over some reactions to the coronavirus outbreak.

Sabsy Almonte, who works as a band singer at a luxury hotel in Xiamen, said Filipinos in China have group chats where they constantly receive updates and videos by Pinoys in Wuhan.

“I’m in tears. I’ve read so many racist comments lately but no #PrayforChina,” she said in a Facebook post. “Let us all learn to love and pray for one another. We need it now more than ever! Wuhan, Jiayou!”

According to the Department of Foreign Affairs (DFA), there are about 150 Pinoys in Wuhan, a city of 11 million, which has been named as the epicenter of the “novel” coronavirus that has infected 4,515 people and killed over 100 as of Tuesday, an Agence France Presse report said.

Nevertheless, the report said that this capital city of Hubei province — the so-called “industrial heartland” of central China — is home to “tough” people.

It noted that it was in Wuhan where an armed rebellion was started against the ruling Qing dynasty in 1911. This paved the way for the establishment of the Republic of China “which ruled until the Communist Party won power in 1949 and declared the People’s Republic of China.”

“For this reason, Wuhan natives have earned a reputation in China for being tough,” AFP said.