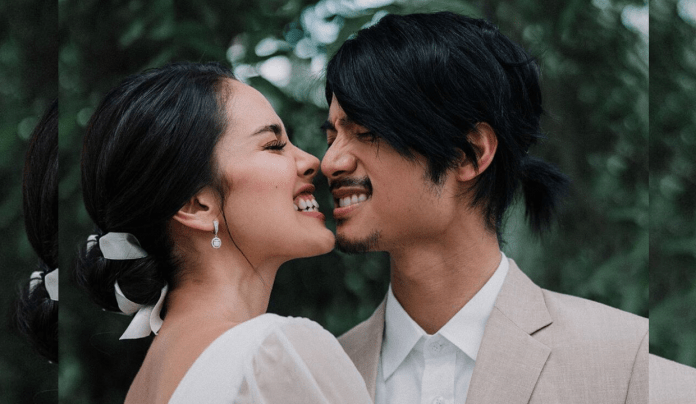 Mikael, 32 and Megan, 29 confirmed their nuptials Saturday by sharing on their social media accounts two sets of wedding photos taken at separate church venues. The bride could be seen wearing different white gowns — one asymmetrical, the other long-sleeved — but both simple and very elegant.

Photos from other attendees indicated that they exchanged “I do’s” Saturday at the San Roque Chapel in Subic, the place where Megan grew up. The other photos showed them exchanging vows at the Caleruega Church in Nasugbu, Batangas. Looks like the actor-host and travel vlogger wed the former Miss World not just once but twice!

“Hello to Megan Young-Daez and it’s time for me to get used to Mikael Daez-Young ?❤️ #Finally,” Mikael said.

“Bonez and Fofo forever! Welcome to the family, Mikael! I love you guys ❤️,” she wrote.

The wedding seemed to be hush-hush and very private that sources said even their home network GMA was surprised at the wedding news.

Nevertheless, in an exclusive story for Metro.Style, it was learned that prior to their “intimate” wedding Saturday in Subic, the couple had already tied the knot last January 10 in “an extremely private ceremony in Caleruega with only a little over 10 guests present.”

The article further said that unknown to many, they’ve been engaged for the last five years in the nine years they’ve been together. Their love story began after meeting for the first time in 2010 at an event where Megan was tapped as the host and Mikael worked as a model.

Meanwhile, fellow celebrities sent their well-wishes to the couple.