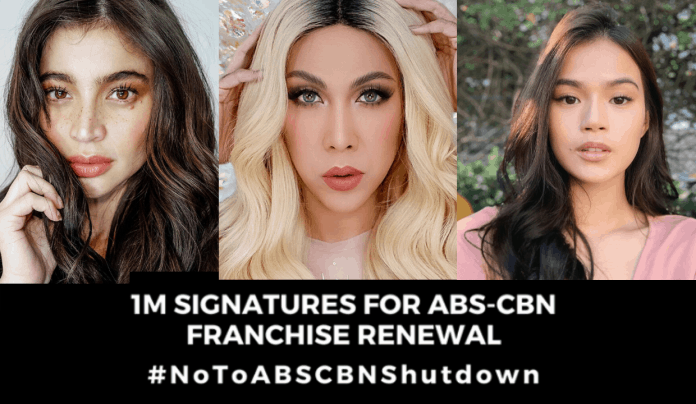 Kapamilya celebrities are urging their followers to show their support for ABS-CBN’s franchise renewal by signing an online petition.

The National Union of Journalists of the Philippines (NUJP) last week initiated an on-ground and online signature campaign petitioning the Congress to renew the media giant’s franchise which is due to expire on March 30.

“We call on Congress to do what is right and immediately pass the bill to renew ABS-CBN’s franchise,” stated NUJP in its Facebook post last Friday.

The online petition on change.org aims to collect one million signatures and will be submitted to Congress for review.

The petition has gathered more than 147,000 signatures to date.

According to a Philstar.com report, “If none of the bills extending ABS-CBN’s franchise for another 25 years is not passed and signed into law, the network’s broadcast services will cease operations.”

President Duterte had repeatedly threatened to block ABS-CBN’s renewal franchise, accusing the network of biased reporting and “swindling” for not airing his paid campaign commercial during the national elections in 2016.

Here are the celebrities who have signed and shared the online campaign on their social media accounts, and who have called on their followers to join them.