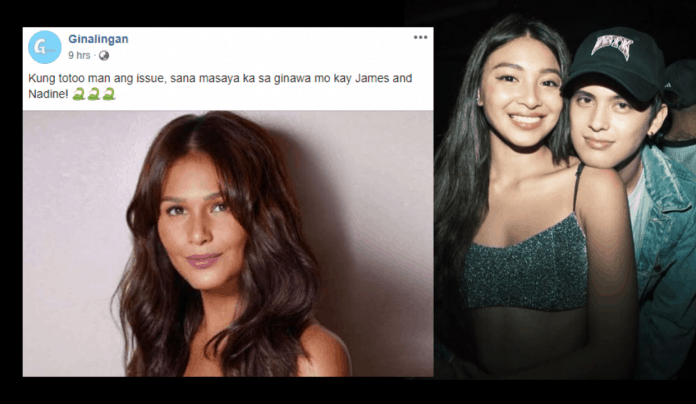 Uh-oh! Kapamilya actress Iza Calzado has reacted on being mistaken as the person accused of causing James Reid and Nadine Lustre’s breakup.

Iza laughed off a post by a Facebook page named Ginalingan which showed a photo of her with the caption, “Kung totoo man ang ginawa mo, sana masaya ka sa ginawa mo!” along with snakes emoji.

In another Instagram story, the 37-year-old actress shared a screenshot of a direct message she received from a netizen who called her a snake.

On a serious note, Iza admitted that she is also heartbroken over James and Nadine splitting up.

Following the confirmation of the breakup, Issa Pressman became a hot topic online and trended on Twitter.

Issa is the younger sister of Yassi Pressman, who is known to be a close friend of JaDine.

Netizens are speculating that Issa is the third party in the JaDine breakup, circulating video clips and screenshots as supposedly proof of James allegedly cheating on Nadine with Issa.

But in a TV Patrol report by MJ Felipe on Tuesday, citing an unnamed source close to James, the actor had reportedly stressed that there was no third party involved in their separation.

In a joint statement aired during the Monday episode of Tonight With Boy Abunda, the now ex-couple confirmed they have parted ways to focus on their “personal growth”.

Iza Calzado looks back on COVID-19 journey a year after...