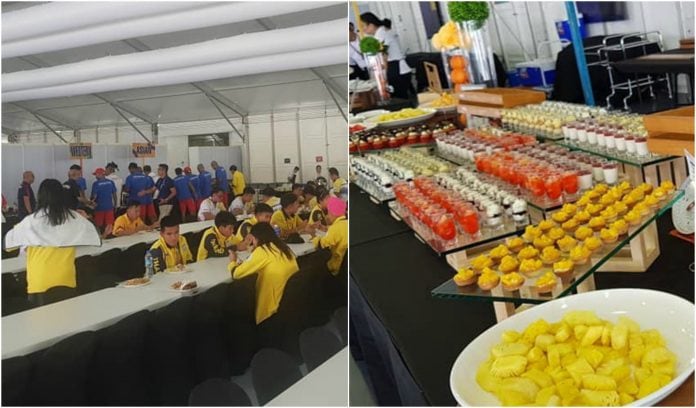 The interview published on Sunday said that Malaysian Athletics Federation deputy president Datuk Mumtaz Jaafar felt that the “wide-ranging menu” and the “six meals per day” at the Athletes’ Village at New Clark City in Tarlac were “simply too good to resist.”

This has been a cause of worry for the official as some of her athletes might enjoy themselves too much.

“We arrived three days before athletics start and, after looking at the mess hall, I’m worried that some of my athletes might over-indulge and put on extra weight,” she told the news outlet.

The report also quoted her as saying that the food is “delicious” and that it was “even better than those served at some hotels” not to mention “it’s open 23 hours every day.”

“With the athletics venue across the road from the Village, I’m afraid they might have too much time in their hands and the mess hall might become the focal point,” she said.

The New Straits Times further reported that athletes billeted at the Athletes’ Village are being served breakfast from 5 a.m. to dinner until 4 a.m. the next day. “In between, there are four more scheduled ‘feeding times,'” it wrote.

Nevertheless, foreign athletes might be comforted to know that manning these kitchens are world-class Filipino culinary experts led by 2019 SEA Games executive chef Bruce Lim and Kapampangan Chef Sau Del Rosario, who are proud and honored to serve the thousands of athletes staying at New Clark City.

In the build-up to the 2019 SEA Games, food issues made the social media rounds and even grabbed headlines. These included Muslim athletes being supposedly served with non-Halal food like pork and football players with kikiam, which organizers have since slammed as “fake news”.