LOOK: Filipina beauty queens who dazzled us in the SEA Games opening ceremony 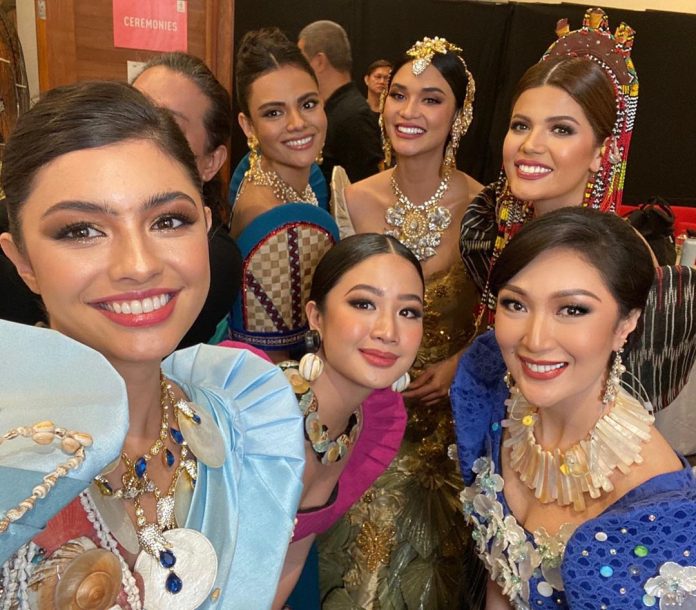 Just because we couldn’t get over it, here are the 11 Filipina beauty queens who were the muses of the participating countries in the opening ceremony of the Southeast Asian (SEA) Games 2019:

Filipina-Australian beauty Karen Gallman is the Philippines’ first-ever holder of the Miss Intercontinental crown. She rose above more than 80 contestants in the competition held in January.

She represented Brunei at the opening ceremony of the SEA Games.

“What an honor to be part of the #seagames2019 opening. Isa lang talaga masasabi ko.. Sobrang nakaka proud maging PINOY,” she said in an Instagram post.

Sophia Senoron made history last year as the Philippines’ first winner of the Miss Multinational pageant in New Delhi, India. She bested 34 other candidates in the international pageant that celebrates diversity.

“Always the greatest pleasure Pilipinas. Thank you for letting me be apart of this page in history. Salamat at mabuhay ang mga atletang Pilipino,” she said in a social media post.

Another history maker, Megan Young was crowned as the country’s first Miss World titleholder in 2013.

The actress-turned-beauty queen was the muse for Indonesia.

She posted photos of her alongside Miss Universe 2015 Pia Wurtzbach at the opening ceremony.

“Each of us walked with a participating country earlier and I’m so happy I got to walk with the Indonesian athletes. Indonesia will always be a country dear to my heart because that’s where I won Miss World,” she shared.

“Took some photos backstage with Queen P @piawurtzbach who walked with the Philippine athletes during the opening number! Nakakakilabot nung sinabi ung ‘PHILIPPINES’!!! During that moment we were all just so proud to be Filipino,” she added.

Fil-German beauty Cynthia Thomalla is the first to win the Miss Eco International crown in 2018. Her advocacy at the time was responsible tourism.

The Cebu-based model was the muse for Laos. She showcased a gown inspired by the seashells from Cebu.

“Proudly wearing a creation inspired by the seashells from the Queen City of the South – CEBU,” she said.

The beauty queen-turned-actress is the winner of Miss International 2005, a Japanese-based international beauty pageant that advocates for a “world where women can live with positivity, inner strength, and individuality.”

Lara walked with the athletes of Malaysia.

“It was an honor to walk with the Malaysian Team and though I honor and respect the other delegates from the other countries, ang puso ko syempre ay para sa Pilipinas,” said Lara, who was Team Philippines muse when the country last hosted the SEA Games in 2005.

Karen Ibasco is the fourth Filipina to win the Miss Earth crown in 2017. The physicist represented the athletes of Myanmar.

“So grateful to represent Myanmar in the 30th Sea Games opening in a beautiful mother of pearls and capiz inspired Filipiniana,” she said in an Instagram post.

After making the country proud for winning the international pageant Miss Earth in 2014, the Cebuana beauty is now a newscaster for the cable news channel One PH.

It was a back-to-back win for the Philippines when our very own Angelia Ong won the title of Miss Earth 2015. She was crowned by her predecessor Jamie Herrell.

Angelia was the muse for Thailand.

Jannie was crowned as the Miss Tourism International last December 2017. She appeared in ABS-CBN’s top-rated teleserye The Killer Bride.

She represented the athletes of Timor-Leste.

Sharifa Akeel bested over 50 candidates who vied for the Miss Asia Pacific International crown last year. She represented the athletes of Vietnam.

Last but definitely not the least is Miss Universe 2015 Pia Wurtzbach. The Filipina-German model proved she is still confidently beautiful with a heart as she walked with the athletes of her home country, the Philippines.

Pia wrote on Instagram: “So happy and blessed to represent our beloved country at the opening of the 30th Southeast Asian Games. Good luck to all the hardworking athletes. Mabuhay po kayo at mabuhay ang bansang Pilipinas!”