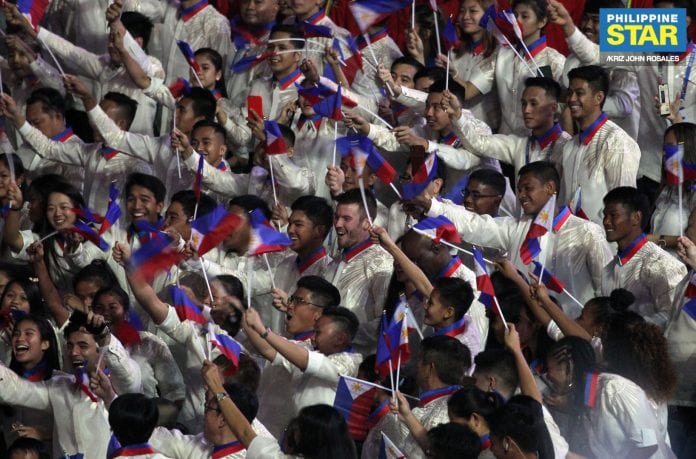 Lea Salonga, Gary Valenciano, Angel Locsin and other celebrities took to their social media accounts to share their thoughts and feelings on the opening ceremony of the 2019 Southeast Asian Games held Saturday night at the Philippine Arena.

The musical spectacle turned the spotlight on Philippine culture, music, beauty and performing talent, among others, as the host country officially welcomed the athletes of the participating countries to the 30th edition of the biennial sports meet.

Actress-TV host Ariella Arida, on the other hand, showed on Instagram that she was part of the audience at the Philippine Arena on Saturday night, describing the parade of Philippine athletes to the tune of Hotdog’s Manila “a proud moment.”

“I am and will always be proud to be a Filipino. Mabuhay ang mga atletang Pinoy,” the former beauty queen also wrote in a separate Instagram post.

Meanwhile, Shaina Magdayao said on her Instagram stories that she was having goosebumps while watching the opening ceremony.

“We will only win as one,” she also captioned another Instagram story.

The Kapamilya actress also shared in an Instagram story her pride for having a nephew participating in this year’s SEA Games.

Angel Locsin also expressed her approval for the opening ceremony program, like a reality competition judge would do.

“SEA Games Opening ceremony… it’s a yes or me!” the actress tweeted.

Lea Salonga, who originally recorded the SEA Games 2019 theme song We Win As One, took to Facebook to congratulate some of the people who were front, back and center of the opening ceremony.

As previously reported, Lea couldn’t perform the song live — not “backed out” contrary to online speculation — because she’s in Singapore starring in the musical thriller Sweeney Todd.

“I’ve not yet seen the full footage but I have seen some snippets and photos. My golly what a spectacular opening!!! Congratulations to everyone involved,” she gushed.

What to expect at the 30th SEA Games opening ceremony

Apl.de.ap plans to set up production company in New Clark...