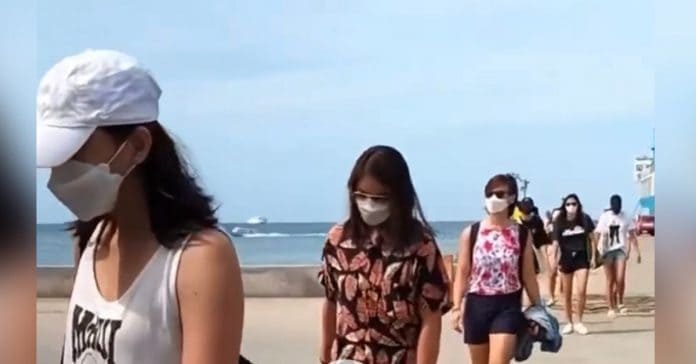 The Choco Mucho Flying Titans Team has addressed the viral video of its volleyball players allegedly snubbing fans in Boracay.

A video of the volleyball stars walking past fans who greeted them sent social media abuzz with some netizens calling them “snobs”.

“This team should be advised that catering to fans is a responsibility, otherwise, stay out of the public eye and play privately. What an irritating yet sad sight. I hope they are advised by their sponsors to act properly in public,” he wrote in a Facebook post reacting to the viral video.

Although Atienza remarked in a reply to a netizen that the players might have been tired out from the trip.

“Pagod lang sila. It happens. It’s also proper to remind them because they are young and have a bright future,” he said.

In a statement released on Monday, the Choco Mucho Flying Titans explained that the team went to Boracay “for a short break after a busy year of heartbreaking finishes”.

While some social media users deemed that some of the players lack “good manners and right conduct”, Choco Mucho stressed that other videos online showed the players granting photo ops to fans.

“Unfortunately, what is not included in the viral clip are other videos online showing the players acknowledging and talking to fans, and accommodating selfies and videos with them while trying to have their break.

“The Team’s fans know how warm, respectful, appreciative, and accommodating the ladies are,” read its statement.

The statement also denounced malicious posts made against their players online.

“While we acknowledge that our team could have handled that particular encounter in the video better, we denounce malicious posts that put our players, our team, and our company in a bad light.

“Posting these innuendoes only bring negativity to our volleyball community and put the well-being of our athletes at risk.”

The Choco Mucho Flying Titans then expressed its gratitude to the fans’ support and respect for the team.

“Together, let us grow the sport of volleyball with an atmosphere of respect for each other.”