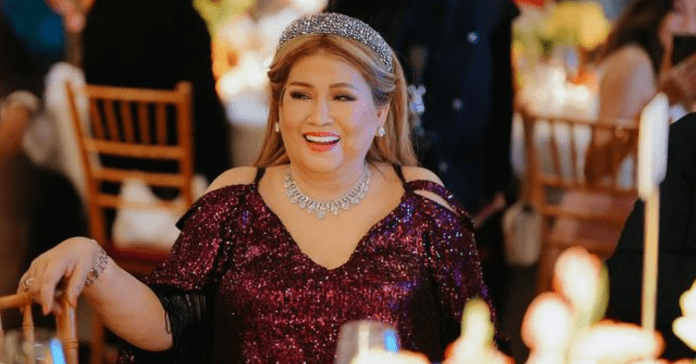 Annabelle Rama is elated following the Department of Justice’s (DOJ) order to withdraw the cyber libel charges filed against her by the ex-aide of former senator Manny Pacquiao.

Due to lack of evidence, the DOJ said it ordered the Office of the Prosecutor in Las Piñas City to withdraw the cyber libel raps filed against the talent manager before the Las Piñas Regional Trial Court Branch 253.

“Accordingly, with the elements of cyber libel not having been fully met and the venue having been improperly laid, we cannot sustain a finding of probable cause,” DOJ said in a resolution.

Granting the motion to withdraw the information, the Las Piñas RTC, stated: “The abovecited information are now withdrawn from the docket of this Court. The manifestation filed by the accused on December 1, 2022 is noted. The hearings of these cases on December 5, 2022 is canceled”.

“Of course we are very happy about it. Ako personally I was relieved because before tita annabelle really wanted to respond to media regarding this case. Kilala naman natin si Tita Annabelle but I just told her to remain silent and just trust the legal proceedings.  At least now she can travel without worrying about that case. Kapag akusado ka kasi kailangan mo magpaalam sa court whenever you will travel outside the country,” said Garduque in a statement.

Jayke Joson, who was former Senator Pacquiao’s business associate, filed cyber libel and cyber-bullying complaints against Annabelle in October 2021 after claiming that she accused him of theft on her social media accounts.

“I pursue this case to fight a bully and a spreader of fake news,” Joson was quoted as saying.

Rama, on the other hand, also filed a cyber libel case against Joson at the Quezon for allegedly calling the former “swindler” and “liar”.

Garduque shared that Rama has testified in the said case and  is set to present their last witness at the next hearing.