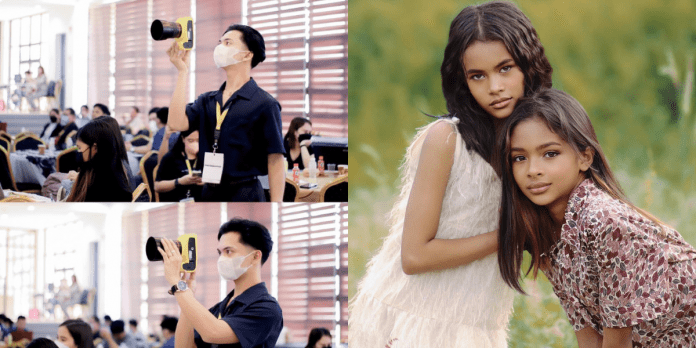 A freelance photographer amazed netizens with the results of his nieces’ photoshoot for their birthday.

On April 27, 2022, uploader Zaan Mark pulled off a surprise photoshoot for Girlie and Diana.

“Hindi pa sila naka-experience ng photoshoot so I decided to have their birthday photoshoot,” he added.

As part of his preparation, Mark looked for an ideal place to shoot. He also planned the theme and peg of the photos.

“I planned everything, I made a mood board. I looked for a place na medyo malayo dito samin so we had to travel using the motor. I really want to make the photoshoot very magical. Nag photoshoot kami sa bridge, tsaka pumunta kami sa ilalim may river dun kami nag photoshoot,” he recalled.

After the photoshoot, Mark said he decided to upload the behind-the-scenes on TikTok while editing the photos.

To his surprise, the photos went viral on social media. The online community also commended his work and his nieces.

“Nag edit ako and then ‘yun I did not expect na ma blow-blow up ko siya sa Tiktok po,” he said.

“Tsaka ang daming mga messages, inquiries. And then nung nag-viral siya, I go to the comment section and then napansin ko nag comment ‘yung mga verified Tiktoker. “ Kudos to the photographer. Parang the girl, the curly hair looks like Zendaya. And then the other one looks like nung sa the Karate Kid na ganito ganyan. So I was so stunned like hindi ako makagalaw,” he added.

As of writing it has already garnered with more than 6.4 views on TikTok.

“Strong emotion in their eyes,” a netizen commented.

Mark said that he was so happy with the positive feedbacks he received from his nieces and from the online community.