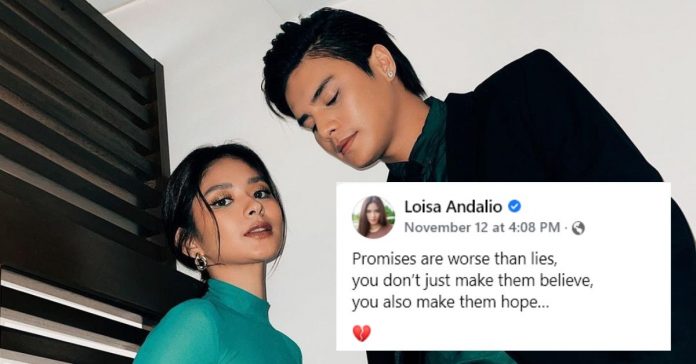 Loisa Andalio dismissed speculations that she and boyfriend Ronnie Alonte have broken up after sharing a cryptic post about broken promises.

The actress recently shared on her social media a quote that says: “Promises are worse than lies, you don’t just make them believe, you also make them hope.”

Although it wasn’t clear whom she was alluding to in her post, this drew concern among fans if there’s trouble in paradise for her and Ronnie.

Loisa was quick to dodge the speculation, saying she was not pertaining to her love life in the said Facebook post.

“Walang maghihiwalay!,” the 23-year-old added in a separate comment as she invited fans to see them in a grand opening of a cafe shop.

Fans then breathed a sigh of relief following Loisa’s clarification.

Loisa and Ronnie are going six years into their relationship on November 26.