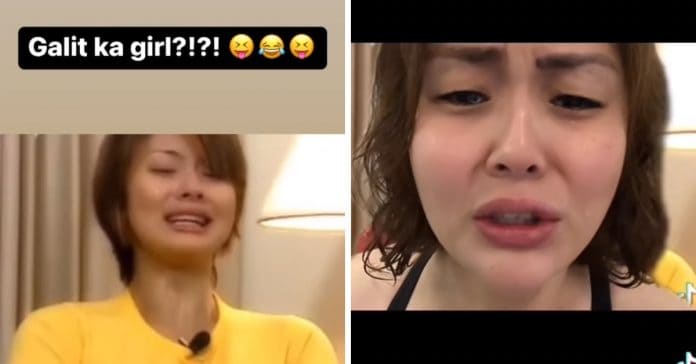 Iwa Moto poked fun at her younger self after an old clip of her getting emotional as a Starstruck contestant resurfaced online.

The said clip has recently been making rounds on social media as netizens create hilarious memes out of Iwa’s “rants”, one of which was posted on Facebook community group Main Pop Girls Stanposting.

The clip showed Iwa in tears while venting about two other contestants in the reality talent competition show, Jackie Rice and Jana Roxas supposedly talking behind her back.

Iwa also admitted getting hurt over the words of fellow contestant Gian Carlos.

Reacting to her resurfaced video getting the attention anew, Iwa wrote in an Instagram story: “Galit ka girl?!?!,” alongside laughing emojis.

The actress also drew laughs after recreating the viral clip in an Instagram reel on Thursday.

“Who better to mock me thank myself,” she wrote as caption.

Iwa finished as third runner-up in the third season of Starstruck where and Jackie Rice and the late Marky Cielo won as the Ultimate Survivors in 2006.