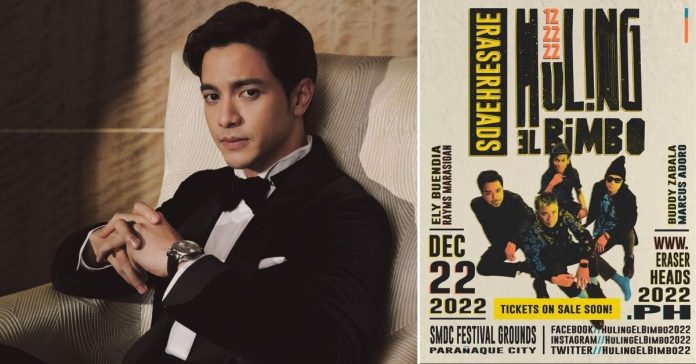 The Kapuso actor made the big reveal on social media after the iconic ’90s rock band’s members confirmed their concert slated for December 22.

“Lift your heads as I present to you my newest business venture Myriad Corporation as a part of this event,” Alden wrote on an Instagram post.

Alden has yet to dish out the details the role Myriad Corporation took part in making the reunion concert happen.

Under his post, fans and his celebrity friends Valeen Montenegro and Jerald Napoles congratulated him for the feat.

It was on September 19 when the OPM icons announced their reunion concert, Ang Huling El Bimbo, which will take place at the SMDC Festival Grounds in Parañaque City.

Eraserheads, the band behind such hits Ang Huling El Bimbo, Ligaya, Alapaap, among many others, is made up of Ely Buendia, Marcus Adoro, Buddy Zabala and Raimund Marasigan. They were formed in 1989, disbanded in the early 2000s and had their first reunion concert in 2008.

Alden Richards thanks fans as he marks 11 years in...

Alden Richards shows up in style for his contract renewal...

Alden Richards to celebrate 10 years in showbiz with ‘virtual...

Here’s how your favorite male celebrities honored their moms on...