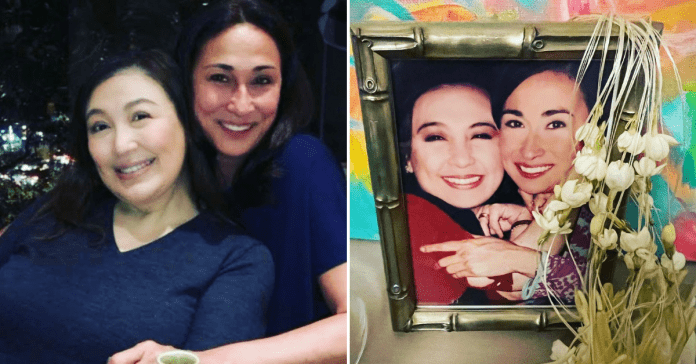 Sharon Cuneta can hardly move on from the death of her dear friend, veteran actress Cherie Gil, who passed away a month ago.

“I am still in deep mourning. It gets harder and harder nowadays to pretend to be okay and smile and laugh only to go back to crying when I am once again, alone,” said Sharon in one of the three Instagram posts dedicated to the late actress.

In an earlier Instagram post, Sharon shared a photo of the last present she received from Cherie – a framed picture of them in an embrace.

“She handed it to me beautifully gift-wrapped.And when I opened it,we hugged,” recalled Sharon.

“That was Cherie.As mataray as she was in her movies, she was as sweet in real life.Our joke was mas mataray nga ako sa kanya di nyo lang alam,” she said.

According to Sharon, the photo “had been proudly displayed in our living room” since she got home from the last dinner she had with Cherie at a Japanese restaurant with her children Miel, Miguel, and Frankie, who’s the late actress’ godchild.

Sharon, as well, is a godparent to Cherie’s eldest son, Jay, while the latter had her unica hija named “Bianca”, which is Sharon’s character from their hit movie “Sana’y Wala Nang Wakas.”

After being away for a time due to work and mom and wife duties, Sharon and Cherie got reconnected, but COVID-19 happened and intercepted their plans of doing projects together.

Sharon also related the moment she found out about Cherie’s health ordeal from the latter’s brother Mike De Mesa who was her co-star in Kapamilya series Ang Probinsyano.

“Backstage,when Mike whispered to me that Cherie wanted me to know,I couldn’t help hitting him on the shoulder and crying.

“I had had her number all those months but told Mike I didn’t want to text or call her because really, what was I going to say? HOW was I going to tell her how I felt when I was so scared to even ask her if she was getting better? I said I wanted to see her face to face,” Sharon remembered the many questions that lingered upon learning of her good friend’s condition.

Sharon went on to share how she’s been dealing with the loss of Cherie.

“It’s self-preservation,my way of coping not losing my mind.I was the same when my Dad, then my Mom passed.I didn’t even bother going early to my Mom’s nightly wake stayed alone with my yaya in my condo away from my husband children,,” she related.

“I wanted to mourn my mother in my own way-alone.Didn’t care what people would say.Now all I can do is like Dorina,I put fresh strands of Sampaguita on her (our)picture everyday,” added Sharon while referring to her character in the ’80s film “Bituing Walang Ningning”.

In a separate Instagram post, Sharon posted a photo of the handwritten letter she got from Cherie which she “kept pristine in one of my planner pockets since 1999”.

Cherie passed away on August 5 after battling endometrial cancer. The veteran actress, known for her iconic kontrabida roles’, was cremated in New York.

“Most of her remains are with our other sister, Elaine, in California. Part of her is with my parents who are also in California, and some are here with my wife and I,” her brother Michael recently revealed.

Michael also clarified: “Bukidnon was her favorite place, but she is not buried there. Some of her ashes were just scattered there”.