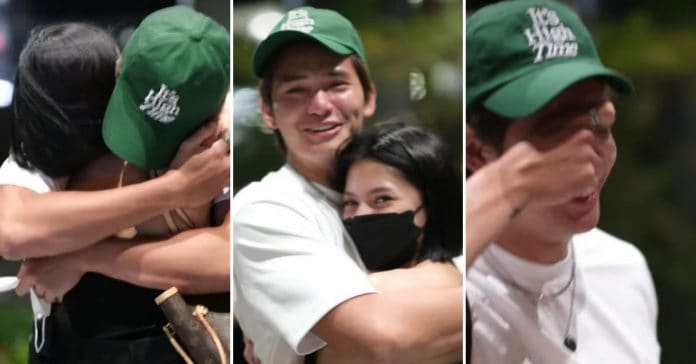 Kapuso actor Ruru Madrid got all emotional when Bianca Umali flew to South Korea to see him.

In an Instagram post, Bianca shared a video showing how she surprised her rumored boyfriend who’s been in Seoul for the filming of the Philippine adaptation of the Korean variety show Running Man.

As seen in the video, Bianca first hid behind a building wall waiting for the perfect time to appear before Ruru.

Ruru had his back turned to Bianca so he was taken aback when the actress whispered something to him from behind.

The Lolong star went speechless and shed tears as he gave Bianca a tight hug.

“Saved the best bit for last ♥ YES – HE CRIED,” Bianca wrote in the caption.

According to the actress, she pulled off the “sweet little plan” with the help of GMA’s Running Man Philippines’ production staff and her bestfriend.

Ruru, meanwhile, replied in the comments section: “I wasn’t crying… there was just something in my eye.”

While Bianca and Ruru have been vocal in expressing their love for each other on social media, they have yet to officially confirm their romantic relationship.

The two have been rumored to be dating since 2018.

Check out some of Bianca and Ruru’s sweet snaps in Seuol here: