STAR gets nominated for Top Media Publisher in TikTok Awards  2022 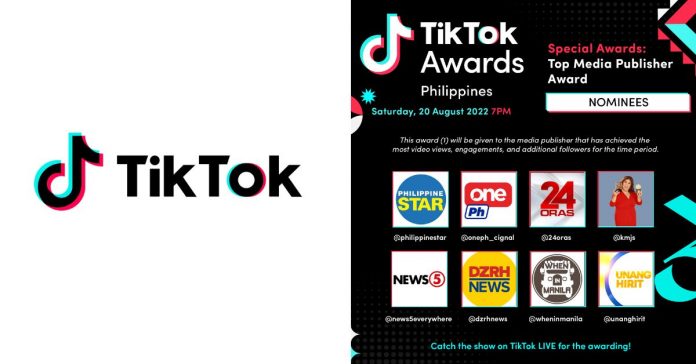 The Philippine STAR has been nominated at this year’s TikTok Awards Philippines.

TikTok Awards is set to recognize creators, public figures and media publishers once again at the awards ceremony happening at the New Frontier Theatre on August 13.

Now on its second year, TikTok Awards introduced the special award “Top Media Publisher Award” which will honor the media publisher “that has achieved the most views, engagements, and additional followers for the time period”.

Launched in November 2021, STAR’s official TikTok now has over 534,000 likes and 10.5 million views on the platform, with contents ranging from news, exclusives, to entertainment, among others.

STAR, the sole print media publisher to get a nod for the said category, is nominated alongside the likes of 24 Oras, Kapuso Mo Jessica Soho, One PH, When In Manila, News5, and DZRH News.

Fans have a chance to vote for their favorites six times a day from August 1until August 12 via TikTok’s in-app site.

Winners will be announced on August 20.