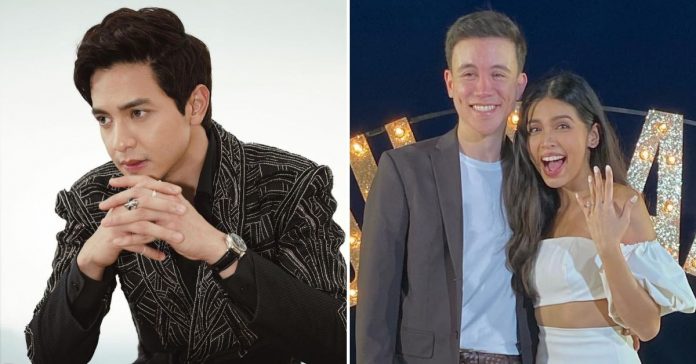 As Maine announced her surprise engagement to the actor-politician on Friday, the Kapuso star was among those who “liked” or double-tapped the heart icon on the actress-host’s Instagram post that featured photos of her showing her engagement ring.

Alden and Maine (Yaya Dub) were widely known as AlDub after their accidental pairing in noontime variety show Eat Bulaga’s “Kalyeserye” segment in 2015.

The phenomenal split-screen romance, which led to Alden and Maine meeting in a grand event dubbed “Tamang Panahon,” ran for about three months.

Aside from being co-hosts in Eat Bulaga, Arjo and Maine starred in films including Imagine You and Me and My Bebe Love.

Maine’s engagement brought nostalgia to some AlDub fans who took to social media to reminisce about the times they used to fangirl over the former loveteam partner.

AlDub fans also went to revisit Maine’s Instagram post on July 16, 2016 where she marked her and Alden’s first anniversary as a love team.

“We might not know what the future holds but you should know that no matter what happens, you already have this special place in my heart,” read a part of Maine’s lengthy message addressed to Alden.

“And I want you to know that even if we end up being together or not, that spot is yours–forever. Happy first anniversary, @aldenrichards02. Thank you for everything,” she added.