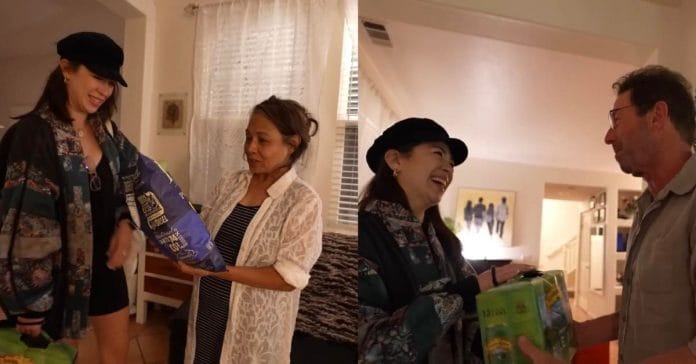 Vlogger Wil Dasovich took “meet the parents” to another level as he introduced actress and rumored girlfriend Carla Humphries to his mom and dad as a “surprise.”

Upon entering Wil’s home, Carla was already welcomed by the vlogger’s mom with a hug and was happy when the actress gifted her favorite snack.

Wil even joked that his mom was already favoring Carla by allowing her to enter their home with her shoes on. Unlike him, who was scolded for leaving his shoes in the middle of their house.

The YouTuber’s dad also welcomed the actress through an embrace.

Carla then gave her gift to Wil’s dad, to which he happily accepted and said that he was nervous to meet her.

The vlogger’s mom also shared that Wil’s dad told her that he felt like he already knew the actress just by watching his son’s vlogs.

“I never met her but I think I already know her from watching the vlogs,” Wil’s mom said talking about his dad.

Prior to this, the vlogger told Carla at the beginning of the vlog that he did not inform his parents about who he would be bringing home and only told them that he would be coming with a “friend.”

“Just be yourself. Show up with a good attitude. ‘Wag kang maarte,” Wil told Carla.

Throughout the drive to Wil’s parents’ home, the actress was more than nervous about meeting Wil’s family.

To which Wil assured her with “what’s wrong with that?”

The vlogger explained to Carla how his mom is “kinda weird sometimes when it’s women.”

“But she’ll get over it. You just have to deal with the awkwardness in the beginning and then it’ll go away after if she likes you. If she doesn’t like you, it will never go away,” Wil said, which made the actress nervous.

The two sparked dating rumors when Wil shared a photo of him and Carla together at the Urban Light art installation in Los Angeles, California back in April.