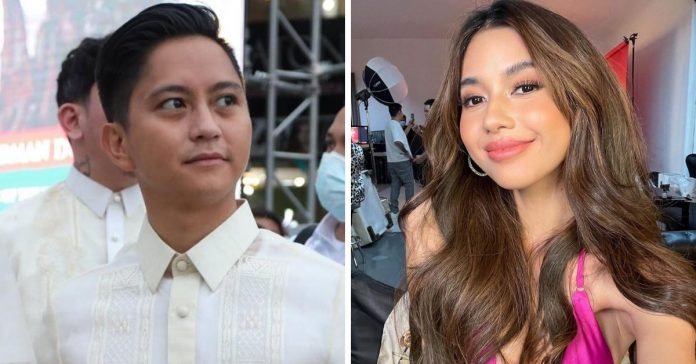 Alexa Miro has spoken up about being linked to Ilocos Norte First District Representative Sandro Marcos.

The sexy actress, who will become a main host of TV 5’ Laugh Out Loud, recently revealed in an interview with showbiz reporter MJ Marfori her real score with the presidential son.

Asked if their relationship got serious, Alexa laughingly responded “naging close”, adding they got close about August 2021.

Recently, Alexa made buzz online after she was reported to be the rumored girlfriend of Sandro, which the actress said was “unsettling for me in the beginning”.

“As much as there’s a lot of supporters, there’s also a couple of bashers. Admittedly it affected me for a little while, kasi first time ko siya na-experience, so iniyak ko siya. But then I just breathed and let it all out,” said Alexa.

A showbiz column by Pilipino Star Ngayon’s Gorgy Rula said Alexa and Sandro have been together since last year and previously went on a trip to Europe.

Alexa confirmed the Europe trip with Sandro in an interview with Marfori, saying that they attended a friend’s wedding in Spain.

Sandro, on the other hand, clarified in an interview with another publication on Thursday that he is not in a relationship.

This was after he was asked about his plans of settling down. “Absolutely not. Ang layo pa. I think wala, wala pa ‘yan sa isip ko,” said Sandro.

“I just plan on, I guess, working harder in Congress but, you know, enjoying my youth while I can,” he added.

The 28-year-old also got asked if he was seeing someone.

“Contrary to what people might believe, sa dami kong nakita sa social media, but actually, I am single,” Sandro stated.

He also aired his thoughts about the online speculations about his love life.

He added, “And I mean, these are my closest friends ever since. I guess that’s bound to happen so that’s okay for me.”