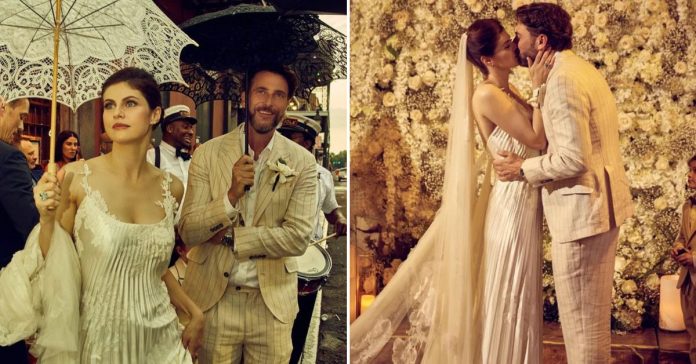 Percy Jackson star Alexandra Daddario has tied the knot with the love of her life!

The 36-year-old American actress took to Instagram on Thursday, June 30, to share snaps of her wedding to longtime partner, TV and film producer Andrew Form at the Preservation Hall in New Orleans.

Alexandra was a sight in her stunning pleated silk wool gown by Danielle Frankel, while Andrew looked laid-back in a Brunello Cucinelli pinstripe suit as seen in the photos published by Vogue.

She simply captioned her Instagram posts with bride and kiss emojis.

Alexandra first made her relationship with Andrew public in May 2021 with a black-and -white photos of them together on Instagram.

“I love you…’and even that is an understatement,’” she wrote as the caption on the sweet photo.

The two announced their engagement in December 2021.

Aside from Percy Jackson, Alexa is also known for her roles in the films Baywatch (2017), and San Andreas (2015), among others. She also stars on the series The White Lotus.

Andrew, on the other hand, is a co-founder of American production company Platinum Dunes which produced films such as “A Quiet Place” and “Teenage Mutant Ninja Turtles”.

He was previously married to “Fast and the Furious” star Jordana Brewster, whom he shares two sons with.