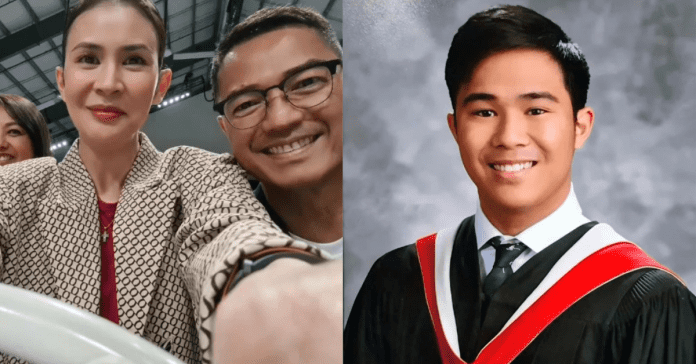 Gelli de Belen and Ariel Rivera are brimming with pride as their son Julio Alessandro just earned his college degree at the University of York in Canada.

The actress took to Instagram to post video clips of her and singer-husband Ariel attending Julio’s graduation ceremony and celebrating their youngest child’s academic milestone.

“Congratulations Julio!!! We are so proud of you,” Gelli wrote in her caption.

She also shared that they forgot to take a family photo during the ceremony, hence they decided to capture one at home while wearing their pajamas.

“My son Julio just graduated. We documented his grad with lots of photos of him, videos of him, a few photos of us while waiting, but we forgot to take a family photo. So we just took one at home in our pajamas when we finally remembered. 🤪😜” the actress wrote.

Fellow celebrities such as Arlene Muhlach, Aiko Melendez, and talent manager Noel Ferrer also congratulated and extended their well-wishes towards Julio and his proud parents.

Gelli and Ariel have been married for more than twenty years. The couple was blessed with two sons: Julio and their firstborn, Joaquin who are both based in Toronto, Canada.