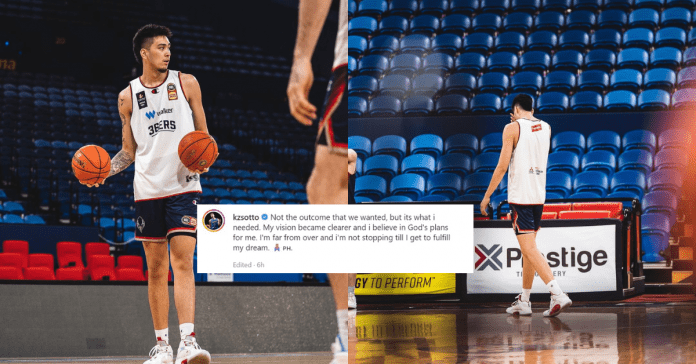 Despite missing his career shot of getting drafted in the NBA last Friday, June 24, Filipino basketball player Kai Sotto said that he remains steadfast in pursuing his dream of joining the professional league.

“Not the outcome that we wanted, but its what i needed. My vision became clearer and i believe in God’s plans for me. I’m far from over and i’m not stopping till I get to fulfill my dream. 🙏🏽🇵🇭,” Sotto wrote in an Instagram post on Friday night, June 24.

Fellow Filipino athletes have since expressed their support towards the 20-year-old basketball player.

Outgoing senator and boxing champion Manny Pacquiao took to his Instagram story to cheer Sotto on.

“We are so proud of you @kzsotto! The dream is not over. Laban lang!! We support you 💯🏀🇵🇭 #PinoyPride,” Pacquiao wrote.

Former Ateneo volleyball player Gretchen Ho also commented on Sotto’s Instagram post and told the basketball player that it was “just a bump in the road” for him.

Emmanuel Malou and Mitchell McCarron who both play for the Adelaide 36ers of the Australian National Basketball League (NBL), where Sotto spent a year before declaring for the NBA draft also offered words of encouragement.

“Love this energy brother!! Big things ahead for you, no doubt about it 💪🏻,” McCarron wrote.

While initial reports say that Sotto is set to play for Gilas Pilipinas, nothing is still set in stone for the Filipino basketball player as he also remains open to playing in the NBA Summer League, according to a report by Philstar.com.