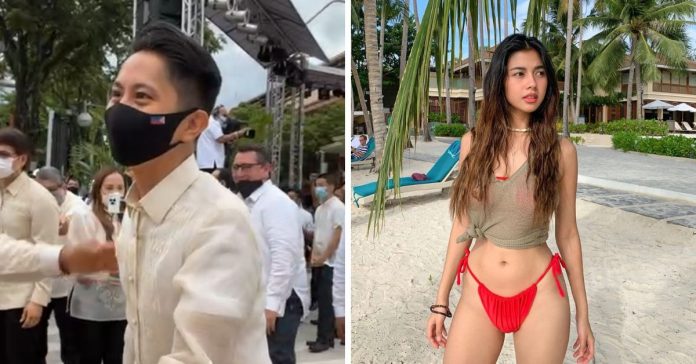 This rising sexy actress is reportedly the “secret girlfriend” of Sandro Marcos.

To which Sandro replied, “Yes po.”

Sandro appeared to have approached other attendees first, before telling Lani, “But atin-atin lang ‘yan, ha.”

The said video was taken during the inauguration ceremony of Vice President Sara Duterte in Davao City, last Sunday, June 19.

In a column on Pilipino Star Ngayon, Gorgy Rula said that sexy actress-singer Alexa Miro’s camp confirmed that she is indeed in a relationship with Sandro.

Rula added that the two have been together since last year but have chosen to keep their relationship private.

The showbiz column furthered that Alexa helped in the electoral campaign of Sandro and recently went on a Europe trip with the latter.

Alexa rose to stardom with her commercial for fast food chain Jollibee’s Valentine series in 2018 that went viral.

She played the lead role in the rom-com film A Girl and A Guy directed by Erik Matti.

In a Philippine Star interview, Alexa shared that she joined the ABS-CBN’s Munting Miss Universe in 2001 and won the competition. She was supposed to enter showbiz after that, but things in her personal life like family issues prevented her from doing so.

Alexa focused on her studies instead, but her love for acting did not fade. She would join theater plays in high school and college. She finished Communication Arts at the De La Salle University.