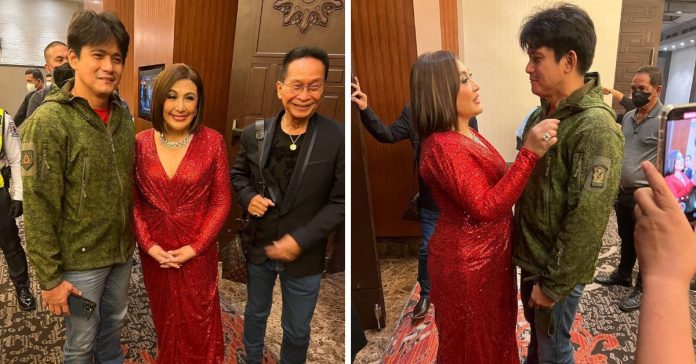 In an Instagram post on Saturday, Sharon shared a series of photos including a pic of her and Regine joined by Darla Sauler, Rica Peralejo, Niki Valdez, Jolina Magdangal and her husband Mark Escueta, among others, backstage.

“Before and after ICONIC last night! Our beloved friends surprised us, including number 1 Senator Robin @robinhoodpadilla who came with Sec. Panelo,” wrote Sharon as caption.

The actress–singer also teased ShaBin fans about a possible movie with Robin.

Robin, meanwhile, seemed to be the one who “reconciled” Sharon and Panelo, who previously had a conflict over the latter singing the singer’s classic song Sana’y Walang Wakas at a campaign sortie in March.

“‘Blessed are the peacemakers, for they will be called children of God,” he quoted in a Facebook post.

Meanwhile, Darla Sauler shared in a tweet that Sharon acknowledged Panelo’s presence and even dedicated the song to the former presidential spokesperson during the concert.