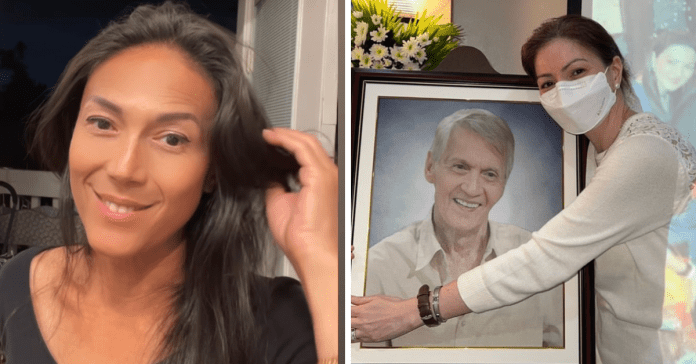 BB Gandanghari has offered her condolences to Carmina Villarroel on the passing of the actress’ father.

Carmina has been mourning the death of her dad, Reggie Villarroel, who passed away last week.

In an Instagram post on Wednesday, June 14, Carmina shared a clip of herself along with other family members doing a balloon release for her late father.

Along with comments from fans offering consolation, BB Gandanghari also left a message offering her deepest sympathy to the bereaved family.

“I’m so sorry to hear… My sincere condolences and deepest sympathy to you and your family,” wrote BB Gandanghari.

Formerly known as the actor Rustom Padilla and ex-husband of Carmina, BB Gandanghari described the latter’s father as “one of the most respectable, kindest and coolest person(s) I have ever met.”

“I feel privileged and pleased to have come to know your Dad that I’ve looked up to him from afar.

“I share with your grief at this time of bereavement. May the God Almighty grant your Dad eternal peace. Hugs to you…,” added BB Gandanghari.

Carmina and Rustom went their separate ways in 1997 after three years of marriage.

In 2009, Rustom came out as a transgender woman and legally changed her name to BB Gandanghari.

In a vlog in 2020, BB Gandanghari revealed that Rustom truly loved Carmina, saying he considered him as a blessing and their separation was the hardest and painful part of their relationship.