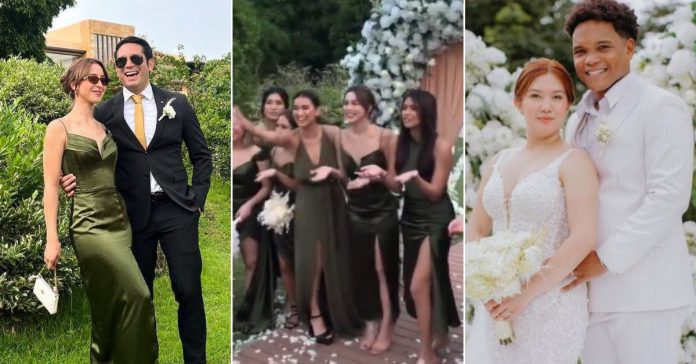 Days after their wedding, Bianca took to Instagram to share some highlights on her big day with Joe, and one of them was her bridal bouquet toss.

In a video she shared, Bianca had her back to some of her bridesmaids and guests such as celebrity friends Julia, Gabbi Garcia, Chie Filomeno, Ria Atayde, Keiko Fox, and Issa Pressman who were waiting in line to catch the bouquet.

Julia and Gabbi even playfully took steps forward for a sure catch.

But turns out, Julia did not have to reach out for the bouquet as Bianca, along with Joe, personally handed the bouquet to the actress.

The couple made the move while taking a glance at Julia’s boyfriend Gerald who was seen laughing in the video.

According to wedding tradition, the person who catches the bouquet is supposedly the next one to get married.

Bianca and Joe tied the knot in a garden ceremony in Nasugbu, Batangas on Wednesday, June 8.

The couple, who have been together for six years, got engaged in January this year.