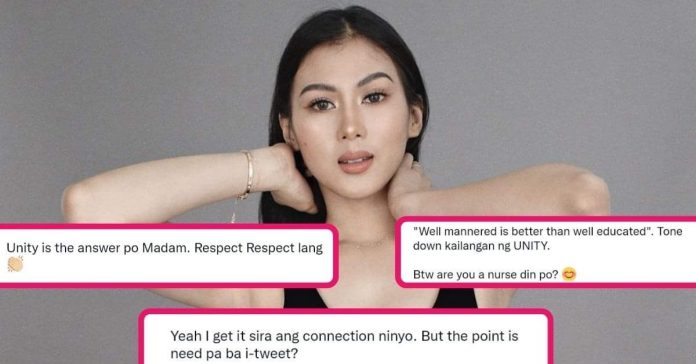 Alex Gonzaga laughed off netizens’ reactions to her now-deleted tweet about having no internet connection for months now.

The actress-TV host on Thursday took to Twitter to call out a telecommunications company for failing to fix the internet connection in her condo despite paying its monthly bill.

Netizens have since aired mixed reactions on Alex’s complaint.

Some Twitter users added political color to their reactions by poking fun at Alex being a supporter of president-elect Ferdinand “Bongbong” Marcos Jr or BBM on social media.

Alex, along with her sister Toni Gonzaga, are known supporters of Marcos Jr.

In a tweet on Friday, Alex thanked her internet service provider for finally restoring her internet connection.

The Lunch Out Loud host seemed to ignore the reactions to her viral tweet at first, as she thanked her six million followers on the platform.

Soon after, Alex said she found it funny and interesting that her tweet went viral for numerous mentions of the word “unity” in the replies.

Marcos Jr. has highlighted unity in his platform during this year’s campaign period.