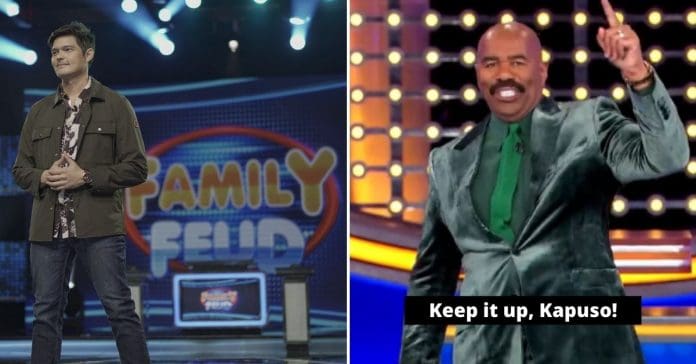 The actor is Steve’s counterpart in the Philippine edition of the iconic trivia game show.

From one Family Feud host to another, the Kapuso artist said the shoutout was comparable to a greeting from Santa Claus.

In the video, Harvey congratulated Family Feud Philippines for being the most-watched game show in the country.

“Mabuhay! Hey, Philippines, look I wanna congratulate Family Feud Philippines on GMA Network. Family Feud is now the most watched game show in the entire Philippines. Wow, you guys are unbelievable. Keep it up, Kapuso!” he said.

Dingdong then opened up in his post, sharing that he knew he had big shoes to fill when he decided to take on the role as host of Family Feud Philippines.

“That’s why I am just so grateful, energized and inspired to receive something like this from a person whose hosting skills I idolize. Maraming salamat, Tito Steve,” he ended his post.

It was back in March when the actor was once again the game master for the local Family Feud program.

Fans can’t get over Marian Rivera and her daughter Zia’s...