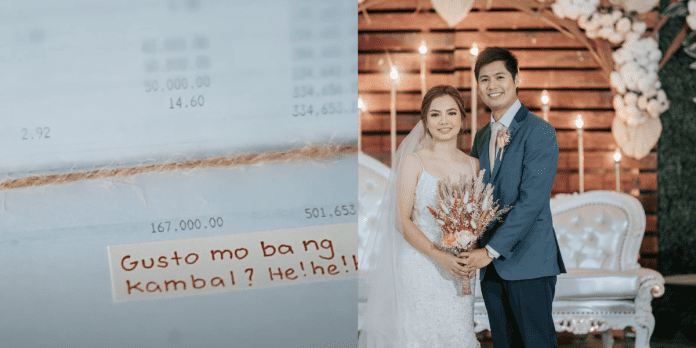 This couple from Bulacan shared an important lesson when getting married—save up for the future.

Paola received from her husband a necklace and two passbooks with savings amounting to P1 million.

The couple noted the importance of managing finances before and after the wedding, to plan for a better future as husband and wife.

Paola said a portion of the P1 million came from their savings as a couple.

The couple said that they decided to conduct a small gathering for their wedding day. They only had 30 guests during the ceremony.

The wedding only cost them P300,000 as they wanted to save up for their future.

Paola said she didn’t expect her husband’s wedding gift, given that they’re both “kuripot.”

The two met in 2016 at a pharmaceutical company where Ploy was working as an engineer while Paola was an intern.

A few months later, their relationship became official. In July 2021, Ploy proposed marriage to Paola after being in a relationship for five years.

Paola and Ploy now enjoy their married life while managing their business. They plan to have a baby soon.

As of writing, the uploaded video on social media has already garnered more than 1.1 million views.