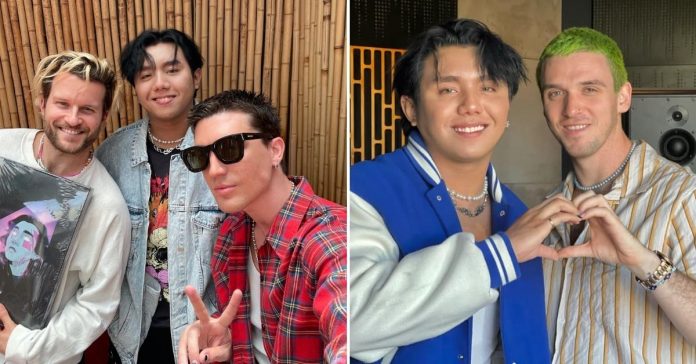 Could there be a Zack Tabudlo collaboration with LANY or Lauv?

Zack recently shared photos of himself with the international artists, sparking speculations that a music collaboration is in the works.

On Thursday, the OPM singer shared a photo of himself sandwiched between Paul Ken and Jake Goss of American indie pop band LANY.

LANY, likewise, shared another photo with Zack tagging the latter in caption with peace symbol, heart on fire, and rose emojis.

Zack previously did covers of LANY’s songs ILYSB, Thru These Tears, and Malibu Nights.

A day after, Zack uploaded snaps of him posing for the camera with “I Like Me Better” hitmaker Lauv in what seemed like a studio recording room.

Zack kicked off his United States tour with December Avenue, with sold-out shows in Los Angeles, Las Vegas, and San Francisco, among others.

First introduced to the public as a contestant in The Voice Kids in 2014, Zack is known for his songs Binibini, Asan Ka Na Ba, and Pano.

Zack was previously featured as an international hitmaker in the American magazine Rolling Stone.

Bianca Manalo clarifies she and Win Gatchalian have no love...