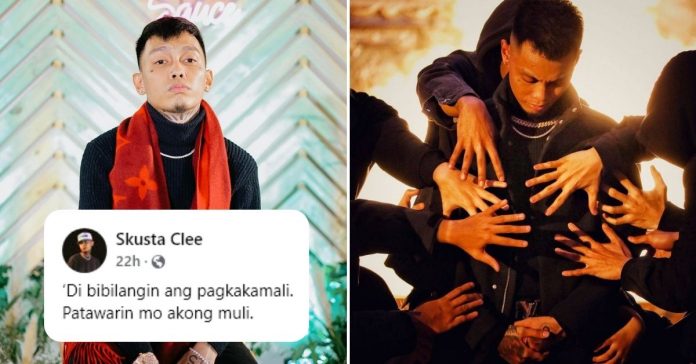 Skusta Clee to release song about forgiveness amid cheating allegations

Skusta Clee is releasing a song about forgiveness, just days after ex-partner, YouTuber Zeinab Harake, opened up about being cheated on by the singer.

On Wednesday, Skusta Clee, or Daryl Ruiz in real life, teased fans with his collaboration song with rapper Gloc, with a photo of him looking down while being surrounded by hands.

Netizens deemed the song’s lyrics as Skusta Clee’s attempt to ask forgiveness and woo Zeinab back into his life.

The online community, however, poked fun at Skusta Clee’s Facebook post which has garnered one million reactions on the platform. Here’s what they are saying:

In the Mother’s Day special of Toni Gonzaga’s Toni Talks, Zeinab confirmed that she and Skusta Clee have already separated.

Zeinab also broke down as she recounted how she found out about Skusta Clee’s alleged infidelity, what she went through after their breakup and losing their second baby due to miscarriage.