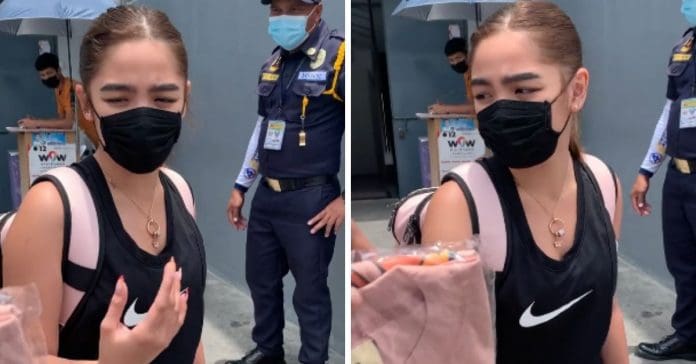 Andrea Brillantes aired her side after a video of her seemingly upset and walking out went viral online.

This after a clothing line posted on TikTok a video of the Kapamilya actress receiving an item from them. The said video has garnered over three million views, as of writing.

Some netizens in the comments section, however, wondered why Andrea looked irked in the five-second clip.

Andrea responded to the netizen’s comment with a video explaining what happened that made her act that way in the video.

“To be honest yes! Actually, medyo bad trip ako niyan,” Andrea admitted saying that the fan supposedly pestered the actress to remove her face mask for a selfie which she refused.

Andrea continued that what made her more annoyed was when the fan asked her to make the “two joints” pose which has been associated with presidential candidate Manila Mayor Isko Moreno who uses the said gesture in his campaigns.

Andrea, meanwhile, turned down the fan’s request and said that she was supporting the presidential candidacy of Vice President Leni Robredo.

The clothing brand also clarified in in the comments section. “Hindi po siya galit, may mga tao po na nag ask if pede nya tanggalin mask and since we’re still on pandemic, she said no and yes po she said thank u☺️.”