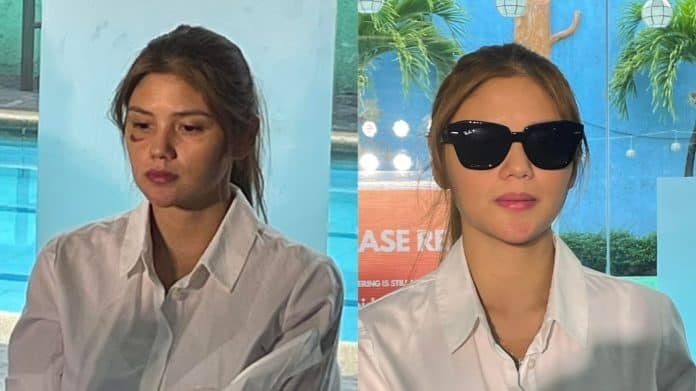 An emotional Ana Jalandoni faced the media during her first public appearance after the alleged physical assault by her boyfriend Kit Thompson at a hotel in Tagaytay City last March 18.

Ana was joined by her father, sister and lawyers during the press conference held in Quezon City.

According to her, it was not the first time that Kit allegedly hurt her. She said that there was already a previous encounter but the incident in Tagaytay was the “worst”.

Ana disclosed that she got married in the United States in 2017 and the relationship ended in 2018.

The 25-year-old actress admitted she still loves Kit and that she is willing to forgive him but that he must face the consequences of his actions. “Mahal ko pa rin siya. Hindi naman po yun ganun kadali mawala. Siyempre ho hindi ko deserve yung nangyari sa akin,” she said.

Her message to Kit was to “fix yourself,” saying the lesson she learned from what happened was: “Unahin ko muna sarili ko bago ibang tao.”

Ana and her legal team are filing two more cases against Kit, frustrated homicide and illegal detention, aside from two counts of violence against women.

The actor has yet to issue an official statement, as of writing. But previously, his management Cornerstone Entertainment, said that it “does not condone any act of violence and profoundly value the dignity of women.

“In this delicate situation, we subscribe to the sound discretion of law enforcement and allow the wheels of justice to take its course,” the statement also said.